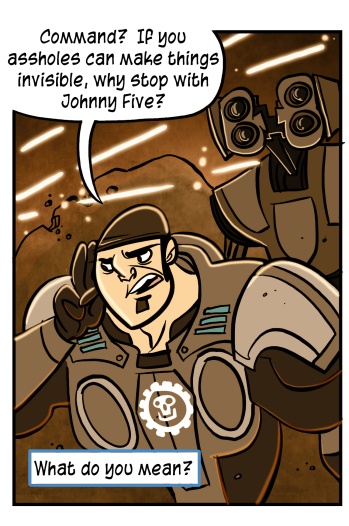 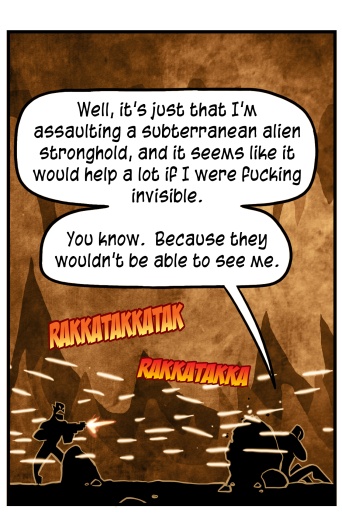 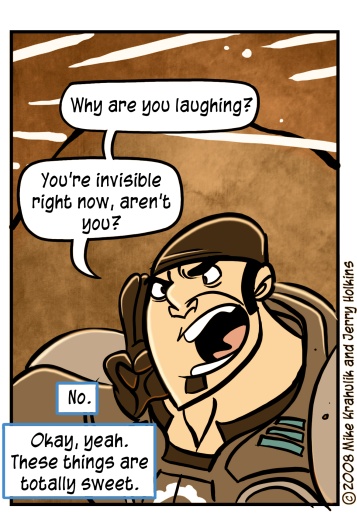 Thoughts and considerations from the Gears 2 Campaign.

Kiko and I have been playing "Wingman" in Gears every night, and are finally coming to understand the mode. In Halo 3, we spent our time mostly in the Team Doubles playlist, which acts as an infinite, endlessly varied cooperative mode. Wingman delivers a similar experience, but is a single gametype, with a single mode of scoring. We were playing it to survive initially, to make it to the end of the round, but it isn't weighted that way: you earn one point per kill, and a single point for surviving, so turtling up isn't really an amazing strategy. This does create situations where you can win the final round and still lose, which we initially found incredibly frustrating. Our solution was comprehensive: score more points.

- Mirror's Edge reviews are starting to materialize, and it's got the nice, even spread that tells me we're dealing with an idiosyncratic experience. We liked the demo, feeling that the final game would (similar to Prince of Persia) rely on the kinds of environments they offer to iterate your choreography. We did not love the demo until I preordered the game from Amazon, receiving in my email a code to unlock its tender "Time Trials." I usually hate this kind of OCD ritual, and avoid them, but in Mirror's Edge this is actually the main draw. The "Runner's Vision" that explicitly marks the official path is gone, here, which liberates you to utilize the environment in an exhilarating, extemporaneous fashion. We'll spend a few minutes on a kind of walking tour of the level, trying to discern its lines, ever in search of some expeditious cranny. In essence, the Time Trials are the game I wanted Mirror's Edge to be.

- With another week of NXE usage, I remain firm in my belief that it shuffles in a progress-oriented direction. The only feature that feels 1.0 in the experience is the new Friends Channel, which is like a visualized version of the old friends list. You may disagree - part of the problem is that I'm at the cap for friends, and so scrolling through it is arduous. Of course, people who are currently online can be found at the beginning, along with people hosting currently available parties. I almost never use it, preferring instead to open the guide and manage things the old way. Jumping into some Resistance 2 earlier in the week, there were a lot of things I missed - even from the old dash. Voice messages, invites that actually invite you into games, chat that persists anywhere. The party system, which substantially expands this functionality, has no analog on the competitor's system.

You may be interested to know that the entire upgrade process took only three minutes - I've got pretty decent cable, so that probably helped with the initial phase, but it's still pretty startling to have only a couple minutes elapse and then emerge with what feels like new equipment. I would compare this sharply with the Playstation 3 process, which is substantially more fiddly and time consuming, requires inputs from controllers the system has just turned off, are delivered far too frequently, and so forth. Just as the Red Ring establishes that Microsoft is a software company, things like this establish that Sony's expertise lies in hardware.