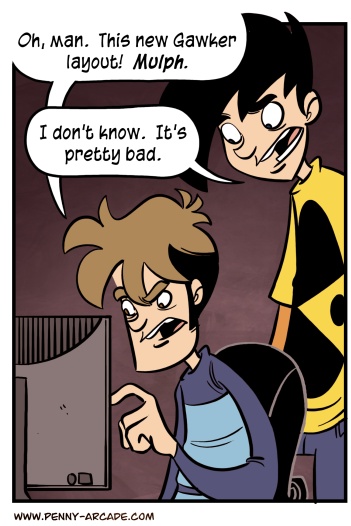 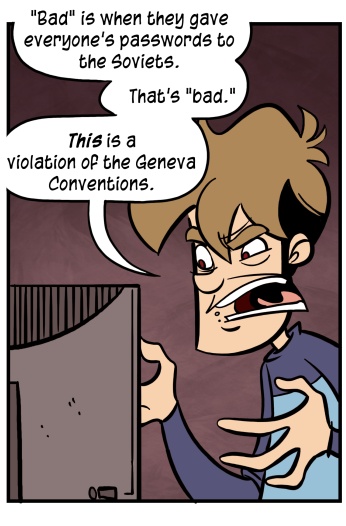 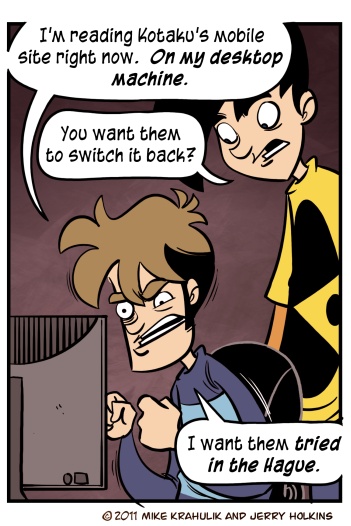 Pulling Gawker sites off my bar felt momentous, but the relief was incredible. Once I realized that I didn't have to look at them, even if I have done so for years, the habit was broken absolutely.  If I am curious what they have said on any of their sites, I type them in manually. That's right.

I type them in.

I need that stuff, though: I need clippings from everywhere, images of smiling dogs, big slabs of Helvetica and Times New Roman. That's how I make the beautiful ransom notes which define our creative output. I started going to m.kotaku.com to shuck the content out of its vile husk, and also because Stephen Totilo vies for "most important gaming blogger" in the red-hot internal poll I'm always running. I don't want to miss out on his insights simply because someone he's probably never met decided to jettison legibility in exchange for... I honestly couldn't tell you what their intention was. I'm not going back there; those sites haunt users, who wander through their marble catacombs in search of a strange music whose source is always just out of sight.

We've finally managed to get Kiko on-board with Killzone 3: he's massaged his impressive shooter skillset into compatibility with the distinct Killzone control paradigm, and the results are such that you should avoid him if it is at all possible to do so. I brought in the Move for everyone to try out here, as my preliminary experiences had been interesting but incomplete, to see if anyone would consider switching.

Classes that park somewhere and act as what is essentially a human weapons platform could see considerable advantages, and actions like covering a door that have you primarily over the sights would also fare well. Generally speaking, though, anyone who is regularly in the mix will probably lose out to one-hit melee attackers and suffer when navigating complicated geometry. Kiko and I tried to tune the controls tick by tick, making incredibly granular adjustments until we saw considerable improvements over the base settings - but even then, for fun and efficacy the regular gamepad was for us a superior method. Don't doubt that there will be Johnny Move out there somewhere, Movin' on up, he's got it all squared away. For single player, I may well leverage the technology. But in a dynamic multiplayer environment, I'm not comfortable taking on the risks and time costs everwhere else.

New Penny Arcade Television is yours to... vis, with the second half of our Table Tennis matchup versus our incredibly gracious hosts at Screenlife.