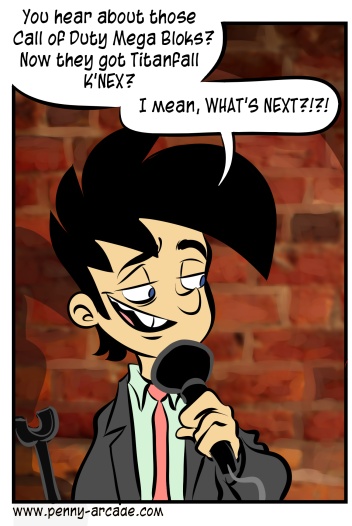 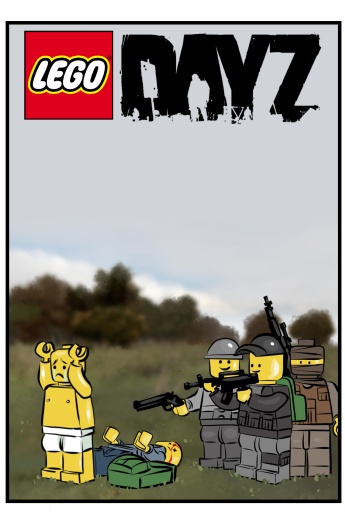 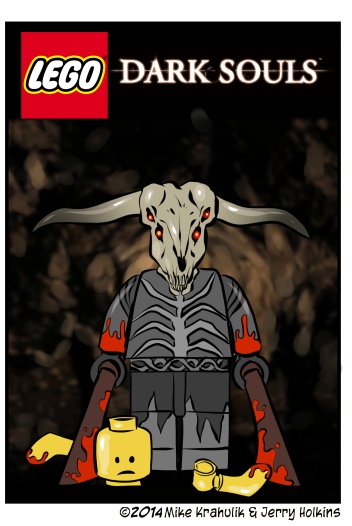 Tie-ins of the constructible sort are something I don't reserve enmity for. Aside from any thoroughly custom pieces, they don't even have to be what it says on the box - you never have to make that if you don't want to. The bricks don't care. Lego is about as philosophical a toy as we allow the young.

I'm not really in the "collectibility" continuum unless collection has a corollary or even primary benefit, such as card games. I purchased the "awesome" version of a game awhile back and then ended up with a statue I could never find room for in my life. It was like the graven idols they warn you about in the Old Testament, and eventually I decided to heed the Almighty on this issue if no other. I am occasionally tempted, but there is a point chronologically where it ceases to be cool as an inherency. It becomes instead something your wife will carry to the dumpster, armful by armful, crying as she does so because you are dead.

Some brands lend themselves to brickification more than others; the microbuild sets for Minecraft are wonderful. I chose that word on purpose, that's actually how I feel. Some range, uh... farther afield.

With the March update now well put through its paces, the warts are a little clearer. As I said when it came out, the direction is correct - the impetus - but it's still at odds with how I want to use it sometimes, and inconsistencies in the experience generally continue to confuse.

As I have suggested repeatedly, I haven't made use of open, general chat on Xbox Live since the advent of Parties. Much has been said about this caustic atmosphere. I'm of the opinion that some creatures thrive in it, like the strange beasts which haunt hydrothermal vents. They are welcome to it: I have all the status I require, and I see no profit in striving against those weird-ass, ad hoc hierarchies. Creating a party is the first thing I do, which is why the old method for Parties on the Xbox One was a non-starter, with its chat defaulting to off. The new scheme is also a non-starter, but in the literal sense, because you can "Snap Party" but it doesn't actually start one. It opens up some kind of window to invite people. I understand why, but it's possible to be too helpful, which is sometimes called Overengineering. That's the right word, but it's so long that it looks German. It keeps pronouncing itself in my mind. But it's like they're making you hold a hammer backward, with the claw end out every time, because why wouldn't you do that it's so useful. Just give me the fucking hammer. Stop telling me how to hold it.

The unsung hero of the entire interface is SmartGlass, but they can never seem to figure out if they love it or not - if it's definitional. That's why I was happy to see a fun implementation on Plants vs Zombies: Garden Warfare. Some apps let you use this extra screen as a keyboard, to which I say yes. Some don't, and you never know if this one will or not until you get your phone out and fail. That type of thing needs to have the weight of a Royal Edict, to be absolute, or people can't trust it. Gabe asked me if I had seen his Titanfall clips from the weekend, and I said no, but I could do so very easily; he was surprised that I could pull him up on on the app and do that from my phone. And he was surprised because they are bad, incredibly bad, perhaps even piss-poor, at crowing when they do something right. I mean, don't make a habit of it or anything. But jeez.

The Twitch app is a thousand miles beyond its competitor, but if they want to stay there they need to bring it into line with the basic philosophy of the system. You need a SmartGlass dashboard that lets you carry the features and functions of the Snap pane: chat, naming, video quadrant, all the basic stuff. Allowing people to opt into chat, to make your stream social at both ends of the connection, seems like the sort of thing that you'd want on your multiplayer game service. Almost nobody plays alone. They play together, they make jokes, they add narrative context. Reflect that.