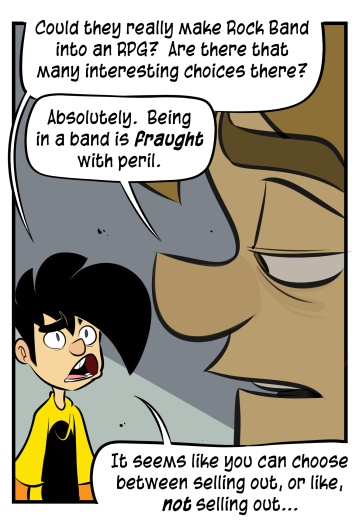 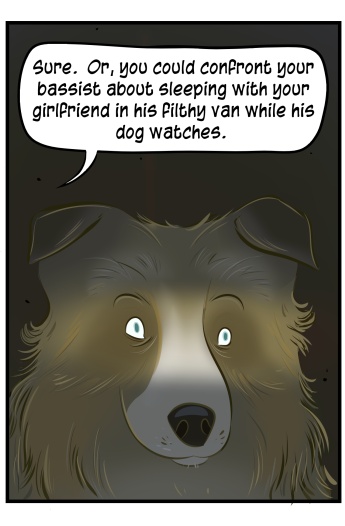 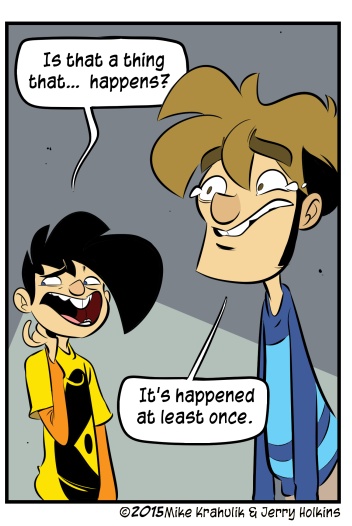 I was lucky with my own bandmates, actually; I was always the least reliable, least talented member, so disappointment tended to flow reliably in the opposite direction. I only played guitar at a couple shows, ever. I mostly just brought a microphone, or put it in someone's bag at practice so it would arrive without effort on my part, then hit the bar before the show to down a Snake Bite to sand the edge off my nerves. Then I'd hand a drink and a blank cassette to the guy at the board, and after the show I would listen to the tape on the way home, and make a thorough accounting of my failures.

The strip is really about the RPG format they adopted for Rock Band 4's campaign. That's very, very distinct from the new Guitar Hero, with its focus on live video performance and playing along with music videos. I think there are going to be players for both of these. In the old days, there was no daylight between the two experiences really. They have to offer something different in order to coexist. Hopefully that's happening this time…?

I was talking to Kris Straub the other day about The Witcher 3, and just witching in general, and he mentioned that he'd washed out of the second one somewhere during or just after the tutorial, as so many did. I don't know what disease of mine, what callus I have formed on my hippocampus allows me to endure things like this, but I have it. It allowed to me to get what I needed out of the first Witcher game. I can't recommend that a person pick up the original Witcher game now, though I would respect you if you did. I'll certainly never forget it. Trust - real trust - in the player. Not merely a trust that the person in front of the computer would be able to click at the preordained times. Trust that players don't need everything in skywriting. Trust to the point where I can pick up a hunk of dimeritium ore in the third game, two games away from the source, and still feel it in my chest.

I accept that the game doesn't look like the older trailer, but I'll be God Damned if 1.04 era The Witcher 3 looks bad. Looking at Geralt outside this whackjob forest shaman's hut I took my hand of the mouse and just stared for awhile. There are times where I can't parse it. What I was going to say the other day was that if you come into The Witcher 3 trained by Elder Scrolls or Dragon Age I can't even imagine what you're experiencing right now. It doesn't go for the punchline. It just builds and builds until you can't breathe.