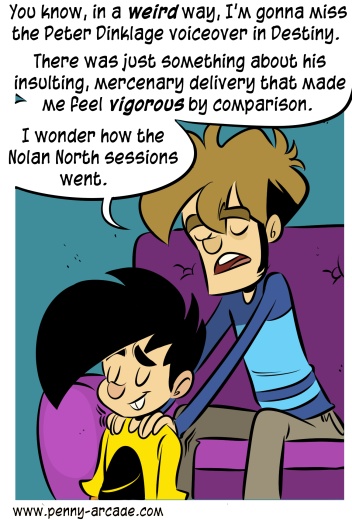 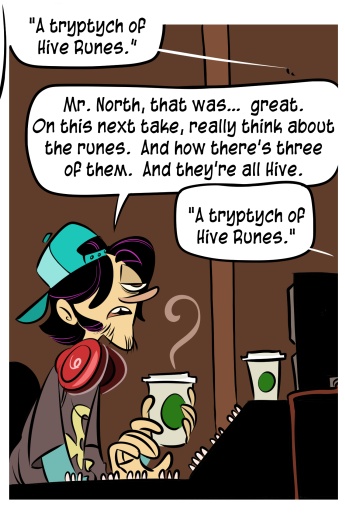 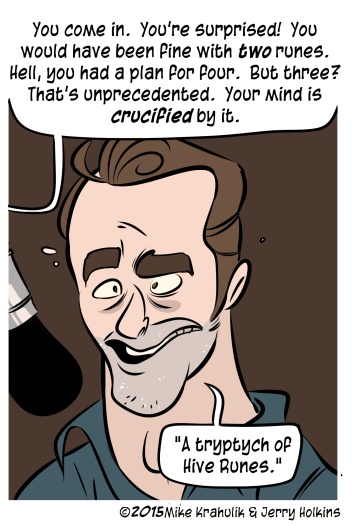 Removing Peter Dinklage and using Nolan North going forward in Destiny is something I can't readily find an analogue for. It's the sort of thing hundreds of developers would do, if they could; a do-over. What I say in the strip is true, though: I will miss the original in a weird way. The structure of Destiny means that you go back through content all the time, and its success is in creating a kind of mantra out of its gameplay. When Gabe and I are in a mission, we say the lines along with him, or we respond to him like it's a conversation - it's Rocky Horror Picture Show in space, with guns.

I met a dude named Jake a long time ago, when his company 17-Bit sent a cake to the office that had a code for Skulls of the Shogun written on it in frosting. I think his wife did it? I really liked that game. And not just on account of the cake.

Is there a term for these unforgiving, unrelenting grudgefuck games that are so hot now? Think about From Software's recent output, Darkest Dungeon, that kind of stuff. If there isn't, I nominate "grudgefuck." I was surprised to see that Galak-Z had become a game of this type since I played it last, but then, what I saw had just pecked its way out of the egg.

A couple years ago, I tried unsuccessfully to play Galak-Z in what is styled the "Indie MEGABOOTH," back when I spent most of my time at the show there. It had a warping, writhing cloud of people around it, swirling like something between a migratory flock and raw motion capture data. In a way, it was good: they were right across the lane from Aztez that year, an unreleased game I still think about every couple days, and I might never have seen it if I'd just went right to the spaceship game. I wasn't able to play Galak-Z until much later, which is where it became clear exceedingly quickly that they had committed themselves to a kind of demon hybrid of Halo and Time Pilot, or, for the young, Halo and Luftrausers. What I played was simply the proof that they had something when I was circle-strafing a space bug while getting shit talked by space jerks. I bought in fully to its Firefight in space dealio. It wasn't a "roguelike," not yet, and I remember collecting mats to craft shit but he says that wasn't in there. I don't believe him. In any case, handmaking levels after that one was right out. From there, it apparently got procedural for real.

I'm only now getting started with it, and wow. I died - died died - in real Galak-Z on level 1-3. This isn't a fuck around type game. You can earn an ur-currency that persists between playthroughs that allows a re-do, but it's so precious that you're loath to use it. I had to set the controller down and have a think. You have to play through an entire five level season to "save," in the classic sense, in the same way you have to Link a fire in Dark Souls or Light a lantern in Bloodborne. And that's how I'm going to have to think of it, the underlying structure, even though to look at it there are bright colors and lots of shooty shoots. Like Super Time Force, which seems to be a retro nostalgia platformer but is not, it's fun to see what happens when people blast their bedrock influences into dust, add water, and spin them on a wheel.