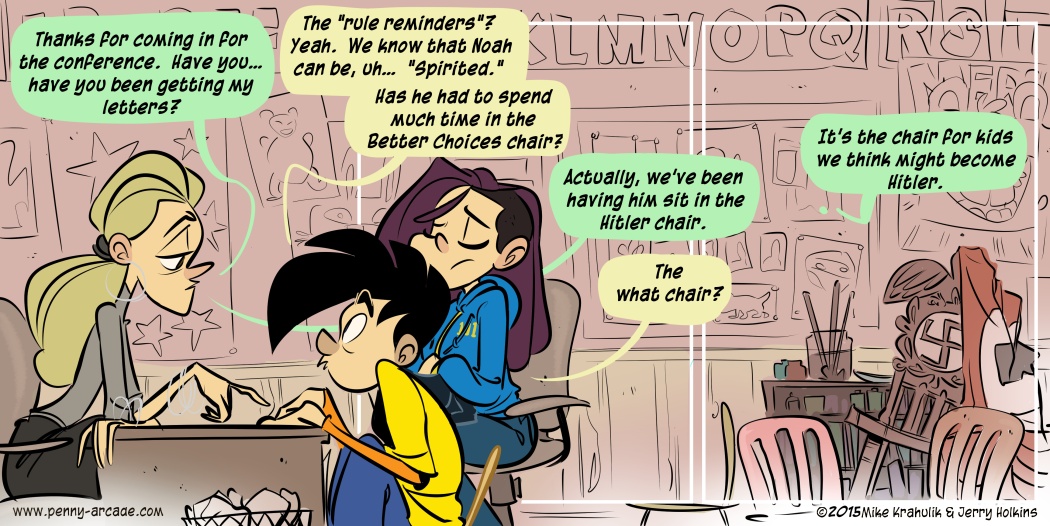 He has different problems at his house than I do. It's funny, if you let it be. It is hard to. But you can see, with your physical eyes, the moment a person learns that what they say doesn't have to be connected with real events.

They'll lie about any Goddamn thing. They'll lie about things you just saw them do! They'll lie about previous lies. They'll lie about lying about lying. And they don't seem to understand a hundred percent that it's happening, either. They seem just as surprised as anyone else that language has the power to describe unreal events. They're still grappling with the idea of permanence. For example, teeth are permanent. Well, technically, only some teeth are, but yeah. And Ronia, I know you haven't brushed your teeth because your mouth smells like ground beef.

My son is "on the spectrum," and there are a bunch of letters doctors have told us to use when describing him, but one of the things that isolates him from other people is that in order to live in our society (and maybe other societies, I dunno) you have to lie 24/7 just to get by. He has a hard time figuring out some of these nuances. People lie and call it being "nice" or "diplomatic" or some other little tiara we place on the good lies. There is also a class of behaviors which are not lies exactly, but abrogations of self, though it still feels like lying. People smell gross and you can't notice. People are wrong about, you know, Ambystoma Mexicanum sometimes and you must make peace.

It's a matter of specializing. My position, of course, is that writers are liars, they are simply liars we sanction. I endure strong compulsions to make sounds of various kinds, and I learned that people privilege certain sounds over others, enough that it was worth my while to make these sounds conform to them: keep the sounds in a rhythm, or make them tonal, and people perceive it as music. Write down the voices in your head, stud it with novel words, and now you're a writer. You know, instead of a whackjob. At least some of the time.