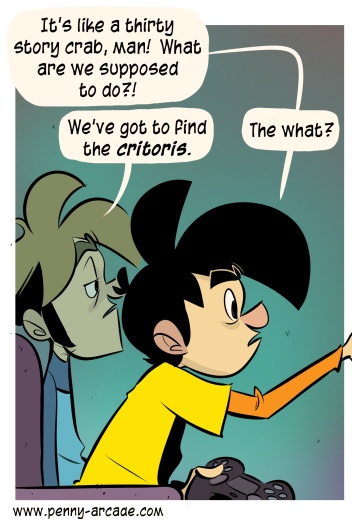 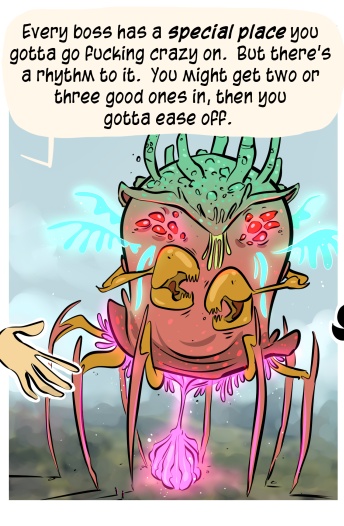 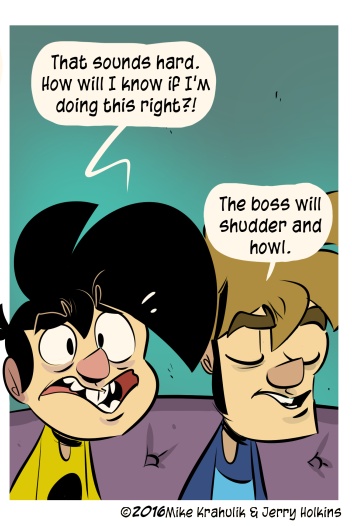 More great advice from me. The strip started out being about some of these weirdass monsters in Xenoblade, alien monsters, alien space unicorns, fongroids (?), and assorted other quadruped a-holes where the A does not stand for ass, but Alien. There are a few "arts" we have, special attacky things, that do extra damage from certain positions - backstab or flank type stuff. Except there are a couple of these Goddamn things that are so weird it's not super clear what even constitutes the "back" or "front." Luckily, they foresaw this, and included a text indicator near the lower right.

It was funnier before we found that.

That save has thirty or so hours on there, we've got a very good loop going, and yet I still feel like we didn't know anything about the game. We specifically haven't sought help, either, from the vast Internet or from the grim work of the haruspex. There is so much to see and know that an indicator which reveals enemy facing was on the screen for more than a day of actual time before we perceived it. The combat is real-time with context-enhanced attacks alongside more traditional "quick-timer" things, and so your consciousness augurs into very specific places every time you aren't running around a giant scary xenoglobe. We found a menu that let us invest in companies, I guess? And then we joined what seemed like a multiplayer raid type thing? We don't know shit, and honestly, it's amazing. Ignorance is generally a thing not to be cultivated but there must be some coordinate between the de rigeur, digitally bolstered hyperawareness and drooling, simpletonian lethargy that allows for discovery while still allowing you to read without mouthing the words.

I haven't had a chance to dig into the final release of Darkest Dungeon, but I have to, just to verify all my theories, and also to fuck around with a haunted-ass bust or something and be mortally poisoned. Like Tharsis, which continues its campaign of intimidation, it should run admirably on the laptop when I'm down at PAX South. Which is next weekend! Next weekend, by God! Saturday tickets, or tix, are all gone but Friday and Sunday are still good bets. 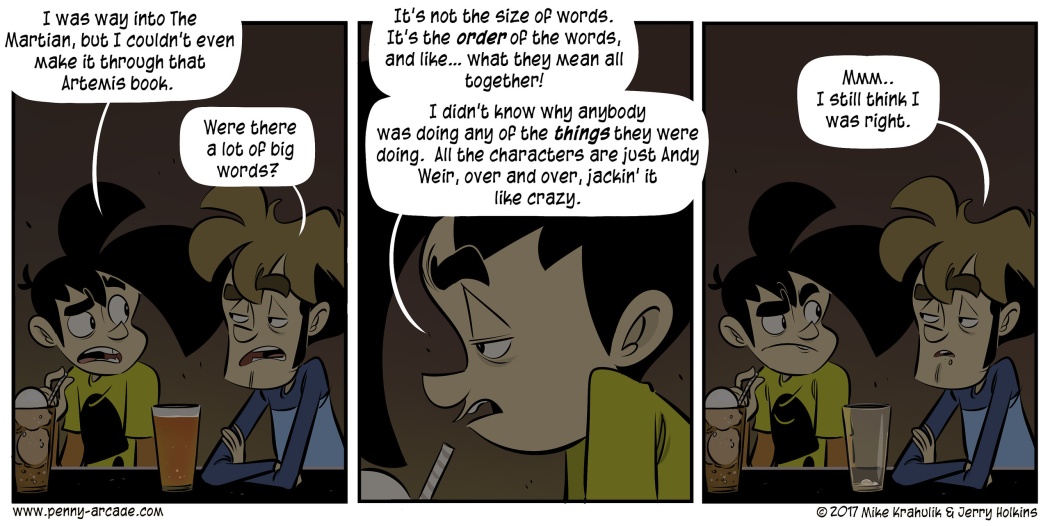