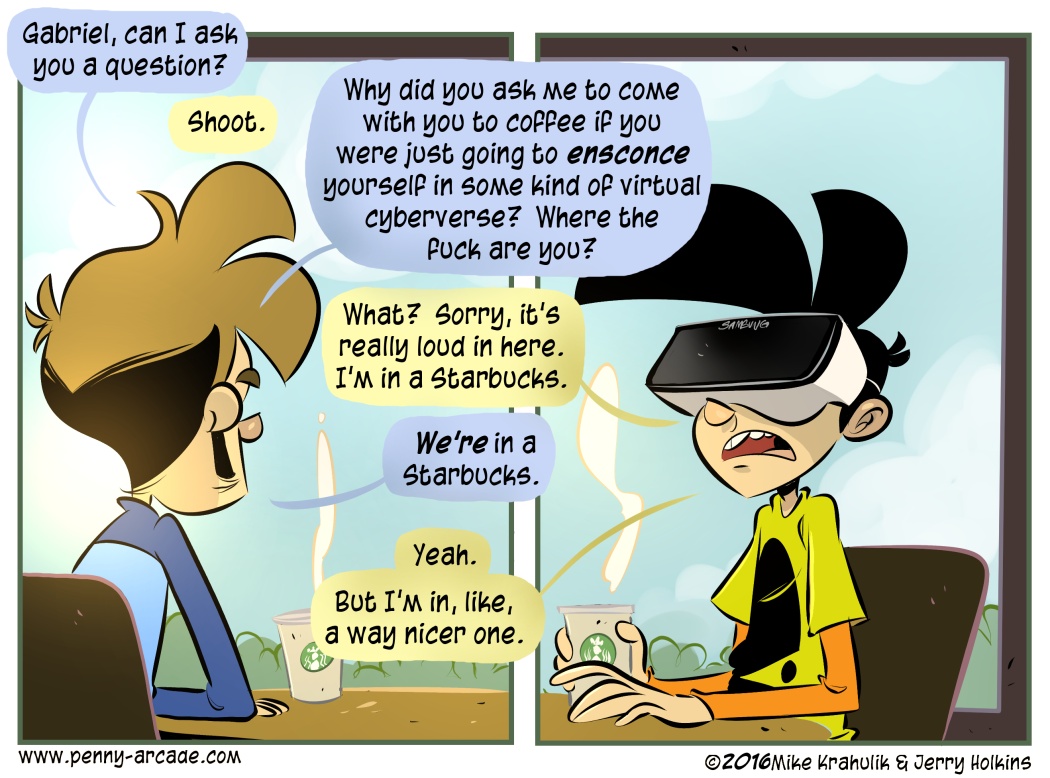 It's been so interesting to watch the Gear VR become a daily use device for Monsieur Greebs. He talked about it a little while ago, and it's still true. He talks to me as much about his face-phone as he does about the other games he's playing. Sure, occasionally he disappears or whatever, but maybe he's just watching a 3D version of The Martian while sitting on the moon. Which is a real thing he did.

I got to the point very quickly with VR that I arrived at during the end of the PS2/Xbox era, which is that I like what I'm doing but I get "lonely" for lack of a better term and I want other people to be there also. It isn't as isolating as I expected, because (as you will see, or have seen) pretty much everybody wants to see what you're doing and has a lot of hot tips re: what you should be doing now. It's a pretty fun way to play; Keep Talking And Nobody Explodes even brings those outside into the mechanics. But they're on the other side of the glass.

Just when I'd determined that I liked puzzle rooms, there's a few approaches to them in VR. What we've learned is that the technology is very good at simulating an uncanny, believable reality, except it's generally a reality that's been scoured of all human life. I just want to put some people in there. I want to help someone solve a puzzle in a room adjacent to me by putting an object they need in a pneumatic tube and sending it to them. I want to pull the plastic film off a 120" television with another person from opposite sides and kiss in the middle. Only then will the promise of virtual reality be made flesh.

There are multiplayer games - Raw Data, HordeZ and Hover Junkers are the ones that leap most readily to mind - but they're all shooters of various stripes. I have precisely zero problem with shooters, don't get me wrong. But I want to play Light Repair Team #4 with someone, like I did in Prism or A Virus Named Tom. I suspect that everything we have in our minds to encourage social behavior and cohesion, that is to say good feelings, is all up and running in VR without any additional hardware. I want to feel that.

(I have to mention something about Hover Junkers real quick: just reloading the weapons in Hover Junkers is the best game of 2016 so far. I've barely played the game at all because I feel like playing it without a friend along is doin it rong, and I was murdered more or less instantaneously the first time I went in there, but nobody had to teach me how to load guns in there it and that is the cool thing about the technology in general. Hang on, let me get out of the parentheses. I don't even know what I was doing with these.)