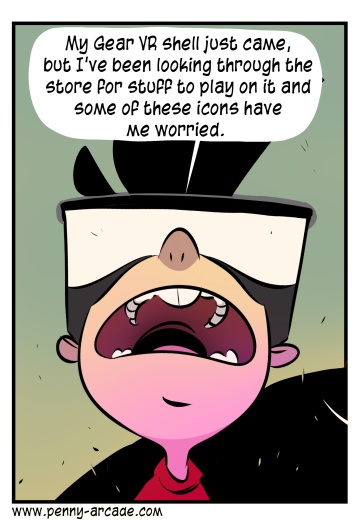 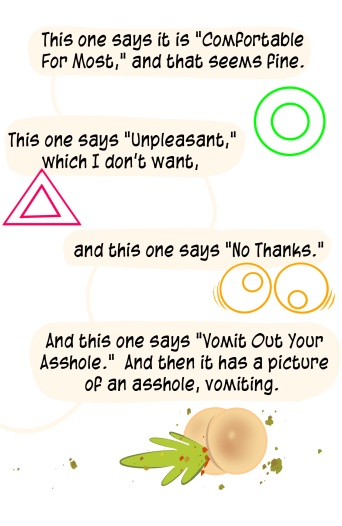 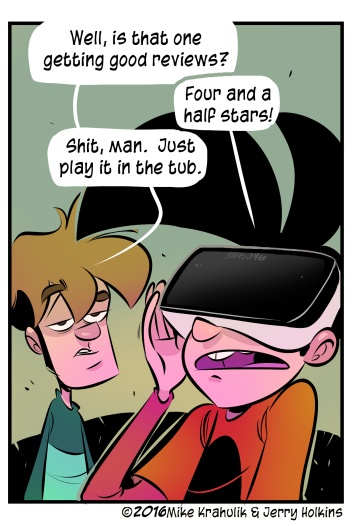 Oculus technology, in either of its incarnations, has a… well, we did do a strip about what it has. Let's see how many words these pictures are worth.

I spent several hours trying to install an Oculus only to find that success had been occluded. It's my own fault, of course; I didn't run the Oculus Does Your Computer Suck Shit tool so I didn't know how much shit my computer was sucking, or at what SPM. I'd also been playing Vive shit without incident for two weeks, so I sorta thought I was in the right spot. It never once occurred to me that my machine could be in league with Satan. Whenever I see bad shit about the Vive it's always down to setup, except I didn't even mount my base stations anywhere - I put one on a shelf and the other one on top of a TV. They aren't even the same height. I don't know why it works and I don't care.

I was under the impression that I had real USB 3.0 ports on my computer, and they have the telltale blue tongues in there, but the Octopus Raft turned up its nose at my chipset. I wanted to tell the Rift, earnestly: I swear this has never happened before. I've inserted other compatible devices without incident! So to speak. I felt authentically judged by this raft. USB 2.0 seems to work so far, but 2.0 is lower than 3.0 and I can't forget it. I grieve like a man at a funeral. I'm considering changing my actual name to Christopher Grieves.

In the end, I bought a PCI USB card that people said would honor the sacred data of the Oracular Vision Helmet. It is perforated with thirsty holes that long for the cable. The back plate of the card is more hole than stuff, probably. I'm gonna need another port anyway when the Oculus Touch comes out, so I decided to do it big (hippopotamus).

I love the setup experience for the Oculus, and I love the Oculus Home, which is not Steam but another vapor altogether that a sommelier might call "young and foolish" and mean it in a positive way. It's a 1.0 product, and I think for most people I think it would make more sense than Steam, but "it's not Steam." God damn if you don't start getting very, very granular about this stuff when you have access to a Vive and a Rift, though - very picky. I find the Rift very comfortable, but it doesn't accommodate my glasses as well. I love the light sensor that turns the Rift on when you put your head in it, but I love the Vive's little plastic flaps that keep your breath down out of the visor. I love the Rift's built-in headphones and easy sensor setup. The Vive has like a million things you have to plug in - it has a little box you literally plug six different things into, and the base stations both need power. But none of it matters when you are wandering around somewhere, even in a tiny area, that feels infinite. I'm ready now. Show me what the second generation of these platforms looks like.

I feel like the conversation for gamers is almost completely about Room Scale, even though most of the best stuff is technically standing only. Oculus will do room shit sooner than later, I'm sure - sooner than they intended to, at any rate. One can almost hear the roadmap contracting. I think their philosophical mission is to make VR a reality as a cultural practice, which was a process they saw as taking a specific amount of time, meeting people where they live, whereas by comparison the Vive basically just has its dick out, spinning like a rotor, generating thrust. Oculus believes, and they are correct, that most people don't have the kind of room a Vive requires. But then you see it, and you're like… how important is a couch.