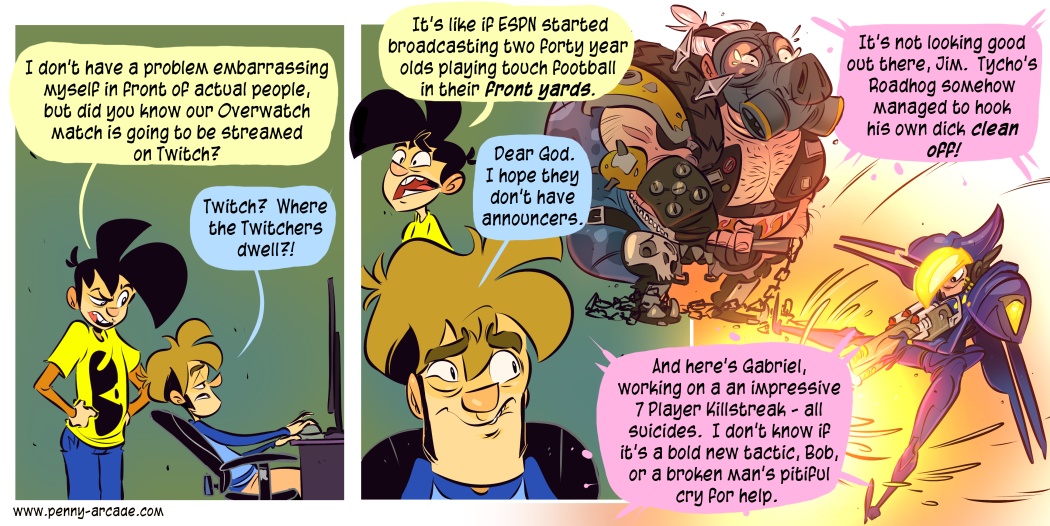 I'm a little nervous about the Overwatch competition on Saturday, for all the reasons you would ordinarily be nervous and then a whole host of brand-new, custom fears borne of today's casual, civic surveillance ecosystem.

Something weird happened, where when we started practicing with our teams and playing up a rivalry that was wholly performative in nature, we both started to take it very seriously and it became real. I remembered why we don't do this, why it's caustic to our union, and how much harder it makes the manufacturing of jpegs, which are Arcadia's chief export. But now I basically want to crucify him. And I've built an organization whose entire purpose is to consume him like a fire.

It only got crazier from there. There are a few moving pieces on this one, I couldn't see the entire project from the lush veranda of my sorcerer's manse, so I didn't know that Kiko had finished the watch. He tells me it is a "Gold Moto360 (Gen 2)" and my ravens have informed me that Gabriel covets the device. Which means he must not be allowed to have it.

The other thing I did not know was that Wyrmwood Gaming, purveyors of exquisite dork artifacts fashioned from exotic woods, had been commissioned to create a legendary vessel for the prize. Looka dis:

This, too, must be jealously guarded from the foe.

UPDATE: Here's how much else I didn't know. Video that I thought was recorded in strict confidence, with someone I thought was a friend, has now been edited into some kind of glossy promotional salvo.

PAX East starts today; maybe I'll see you around. I can typically be found in the Exhibition Hall looking at stuff nobody knew was gonna be at PAX East, or over in the vasty Tabletop section getting a demo of a game while the game's actual designer is watching me learn it from the next table over. Oh yeah. I'm on to your shit.