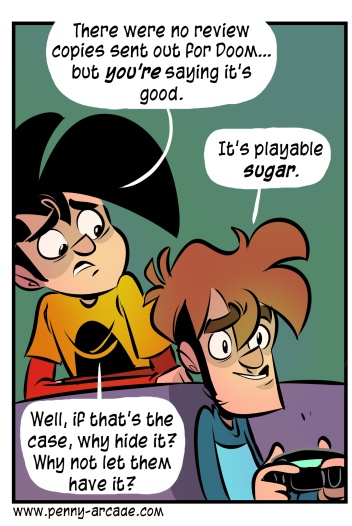 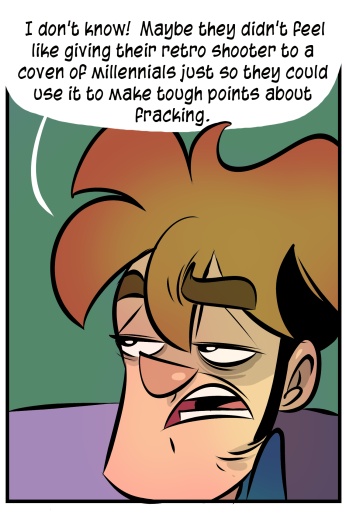 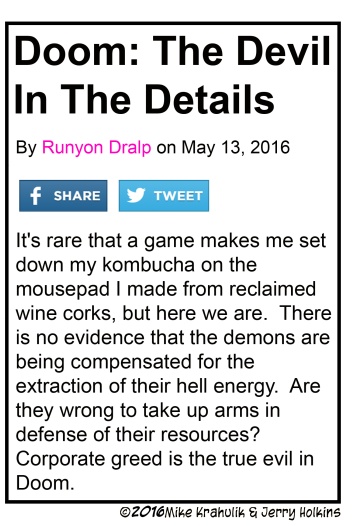 There is a completely natural, thoroughly understandable wariness between gaming press and publishers. It's not just the way it should be, it's the way it literally is. We have discussed it before, and not that long ago, in this strip and the post which accompanied it.

I get codes sometimes, God knows why, but if somebody doesn't send me a code I don't come on here and say "mean man no send me code" in a way that isn't intended as a joke about trying to scam codes. The early codes alone lead to no end of problems from a rhetorical perspective, and they make you a liar retroactively, because what you're playing isn't what anybody who buys the game is getting. Those working servers, for example. Those scheduled playtimes that stuff matches with combatants. A build before several gigs worth of Day One patch.

As often as not, in the reviews I read from The Review Places I frequent, the software product is just grist for some kind of creative writing project slash performance art piece half the time anyway. I ain't even mad. You do your shit. You have to, because when it comes time to do your own thing, you have to know what you sound like. It's all good. But the people who produce these games are not obligated to pay for that, or enable it, or enable you, or take any time out of their day to make sure you have their stuff for free. They don't have to come talk to us anymore - you, or me. The action isn't in text or still images now. Do you think there's something about this that I don't know?

There was a time where I would have said not throwing your work to the lions would have represented some paucity of virtue on the part of the product; such times appear to be over. This is a game people refer to in the same sentence as Tony Hawk or Bulletstorm, which should make no sense, until you see that its melee "Glory Kills" essentially turn enemies into platforms you must jump between to stay alive. The headroom in this, mechanically, is luxuriant in its volume. They could play around with this for years. Doom could be back - not as a one off, but as a going concern.

The way I've typically seen it presented is that the campaign is good, but the multiplayer is bad, or even foul, with a layer of scum baked on by a cruel sun. Gabriel has played hours and hours of it. Now, if you have spent any time around here, you will know that I'm not presenting the affection of a common Grob as some kind of litmus test. What I will say is that it's a creature of another era: specifically, our era. It is like an Otter Pop. Do you know about those? It's actually better for my metaphor if you don't: it's a tasty thing which has, over the years, become commingled with the memory of a time and place until it's no longer an object but a psychomaterial amalgam. Doom multiplayer is really Quake-Doom, or "Quoom," and something about its dizzying speed and consciously ridiculous hell bullshit rouses some mothballed skills we thought might stay in that box forever.