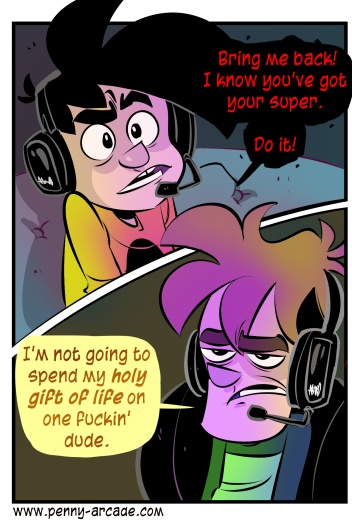 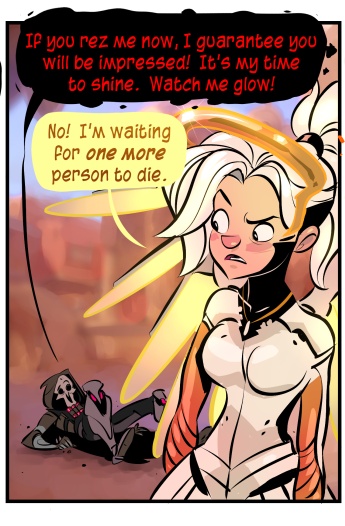 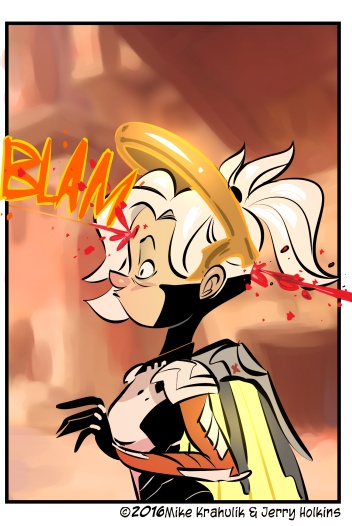 This is only for the comic! I play Roadhog or Torbjörn, unless we're doing well and I feel comfortable experimenting - Soldier 76 and Reinhardt are both robust ships of the line type champs, or heroes I guess, everybody has to have their name for it; I'm partial to Brutals, myself. Reinhardt is a nice tarpit and Soldier 76 is fuckin' workhorse. I want to have them in my back pocket.

Kara is actually the healer. And I vote for her at the end when she comes up to be honored. Which she basically always does. And sometimes I glow because she has returned my spirit to my body, restoring my life. So Kara's pretty cool. I've never played a support character in Overwatch even once, even though "that's what I do." Zarya is a neat twist on the support norm, and that's about as close as I get; she deploys shields on herself and others, and when those shields take damage it boosts her own damage. She's a savory combination of Gork and Mork.

All the pieces of a game are here, with quick matches between a copious, potentially even cornucopial toybox of fully poseable figurines. It's a testament to these ingredients that it works, because as a shooter there aren't that many ways to engage with it. I don't think Overwatch is going anywhere, though: I think it's probably best to say that Overwatch is a platform which can be arranged in a number of valid configurations. It's not a MOBA, for example. But it could be. In a heartbeat. It can be a wave-based cooperative game. They can test things in weekly Brawls that become permanent fixtures, and modes can emerge organically. So, I like Overwatch. A lot. But I also think this is a space that will tolerate, and to my mind demands, a highly exploratory, iterative philosophy long after launch.

We're playing it on PS4, which is to say, Gabriel is playing it on PS4 and if I want to play with him that's where I have to do it. My Roadhog hook percentage is in the shitter switching to the gamepad - I had a good thing going, before. Thus far, he has not chastised me overmuch.