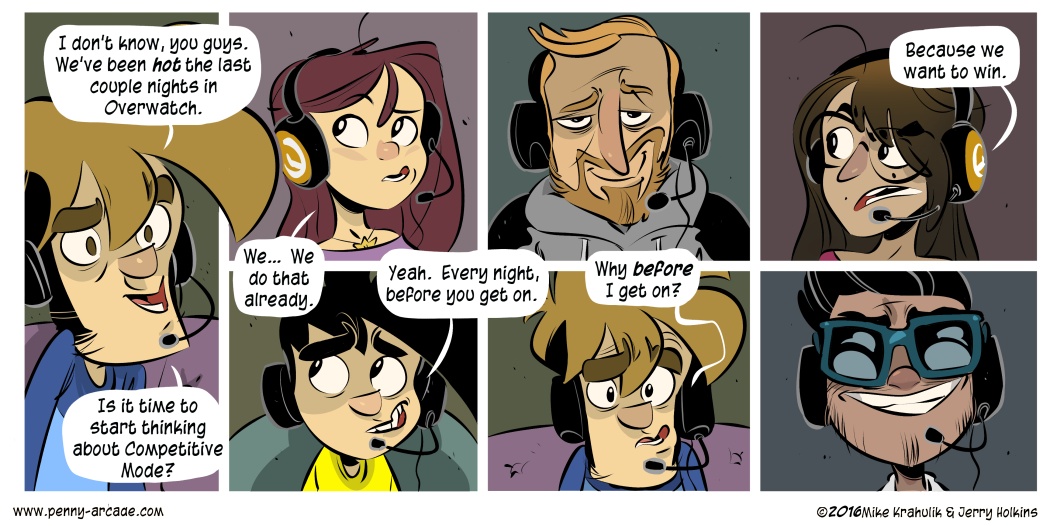 There's a podcast for this strip that'll hit in a little while, and the reason I call it out specifically is that you will hear within this podcast that the strip is essentially a documentary - you'll be able to hear the moment my heart breaks. I was getting on at 10 because I thought everybody was getting on at ten. Not true! They're actually getting on much, much earlier.

Character stacking for Competitive Mode is out, before I ever even got in there seriously. I understand why, because it's busted for real sometimes. A seam erupts in the competitive floor and demons start leaping out of it. I'm not sure that I want to take the game so seriously that the edge cases aren't possible anymore, which is probably why people play Competitive Mode before I get on.

Fighting five Torbjorns can be a huge pain in the ass, or the Triple Torb-Bastion-Symmetra chimeroid one must occasionally contend with, but I do like the fact that such monsters are possible in the system. I like that it's sort of wooly and unkempt sometimes, possibly even tousled; my favorite thing about the game is cracking bullshit team comps. Bullshit being a relative term, of course; if you're trying to succeed at the game, and everyone has access to the same toolkit, and they lose and you win we need to take that data into account. Even if, you know, said data consists of five mechanically inclined dwarves all using Molten Core simultaneously. My favorite memory of the game so far is when we went with six Zaryas, which kicked off an arms race of warring compositions that lasted three full rounds. It was, functionally speaking, Identity Jazz.

It's Wednesday, which means it's time for another feverish bout of Acquisition and Incorporation. Here's the latest and greatest, as always, with an artisinal thumbnail by Josh Price, but you can also Subscribe to the channel or Start From The Beginning.