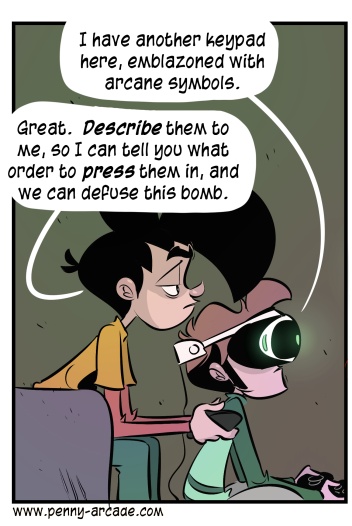 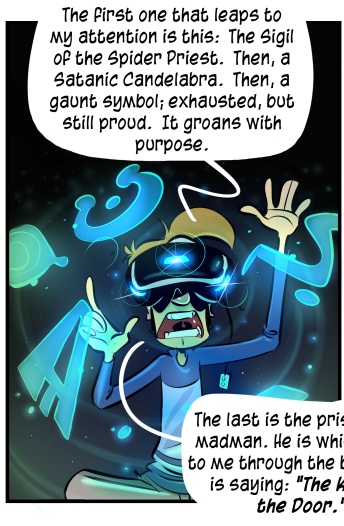 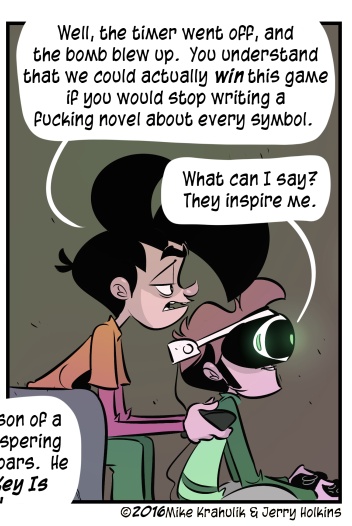 The first time I saw Keep Talking And Nobody Explodes must have been a couple years ago, when Virtual Reality gear was even more rarified than it was now: the presentation involved a card table and what must have been an Oculus DK2. In the real world this configuration wasn't much to look at, but the real world is a woven fabric consisting primarily of lies we have agreed to believe. I spent a very long time there watching other people play it because I'm obsessed with asymmetry. And Keep Talking And Nobody Explodes is asymmetrical as fuck.

This game is about the part of the movie where a neophyte is presented with an explosive device, and over a tinny landline a expert with a calm voice must help them dismantle it. The Defuser can see and manipulate the various controls of the bomb. The Expert has a manual on the television, and they use the descriptions from the Defuser to determine the proper means of defusal. There can be as many Experts as you want, though, because you can just download the Bomb Manual from http://www.bombmanual.com/. Which will probably get your ass on a naughty list somewhere. But! There is a version of me in an adjacent universe where I write technical manuals for a living, and even through the space-walls that separate our realms, I can feel the pulse of his hearts increase. The manual is a peripheral! Italics!!!

This is, to my mind, one of the more novel scenarios VR presents. Not just Keep Talking in particular, but one game with different perspectives. Sony's Playroom VR is the flagship for this, and is the first experience of its type that many people will ever see: one person takes on the role of a hungry cat versus other players who are mice, or a stompy, massive reptilon pursuing a troupe of heroic others. Each sees different things. You can tell in these that the PS4 is working its ass off, which is part of why there's such a thing as a PS4 Pro. The WiiU was savvy initially about this type of play; maybe designing two games at once isn't something most people want to do.

The apotheosis of this shit, of course, is a Cyberpunky, Shadowrunny game where one player is the netrunner and the other players are the rest of the team, playing an interconnected experience, either as a videogame or as part of a puzzle room. I will sit here, very still, while someone makes that. Please let me know when you're done.