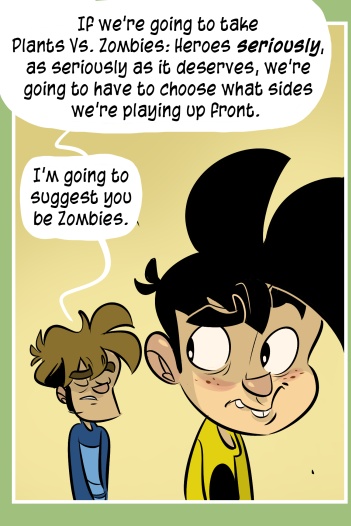 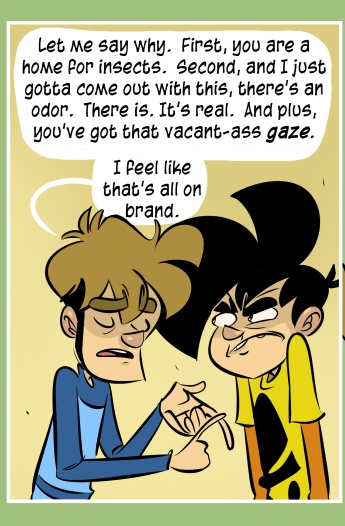 (My first iteration of this post was thoroughly dramatic on account of an open italics tag. Let's try this again.)

Somehow, and the route is somewhat odd, but somehow we became:

So far, so good. But then we also became

which is a little oblique maybe from the other ones, but sometimes you have to be the person who is needed at the time. Once a year, in the prosecution of that goal, we operate an amazing Dinner & Auction where people dress up and have dinner and then, as though by magic, a process is catalyzed which comforts the young and suffering. Tickets for this event are available now, by the way - tickets for individuals, and tickets for sponsored tables if you want to roll deep. For charity.

Something Gabriel and I offer at this auction is a custom comic strip, to be displayed on Penny Arcade, and this time Popcap was able to elbow others (charitably!) out of the top spot and secure the strip for themselves. We got back in touch with them a few months ago about it, did they have any specific ideas, etcetera, and they said they were working on something cool but couldn't talk about it yet, and maybe that would be a good match. I said that was fine, provided that it was sufficiently rad.

Plants vs Zombies: Heroes is a game I played a paper prototype of, hand-cut cards sleeved for durability, and I disappeared into the table. I was floored by it. In the same way that PvZ made "tower defense" digestible to humanity at large, Heroes has the potential to take Magic: The Gathering and take the concepts of type, deckbuilding, and even PVP and finish the work that Hearthstone started in the wider culture. Here's the strip they commissioned, and it was a pleasure to do it; if they need another strip, I'd gladly accept payment in digital cards.