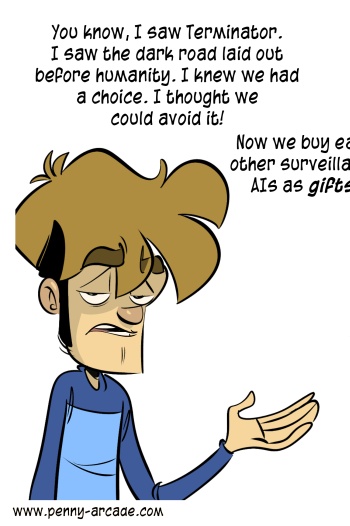 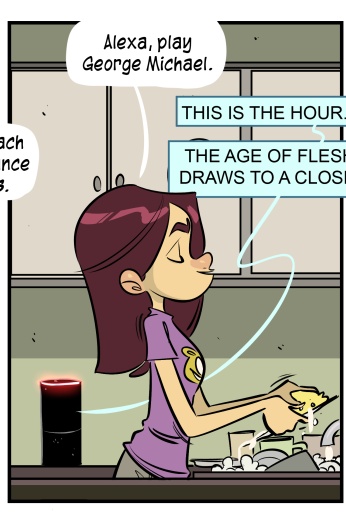 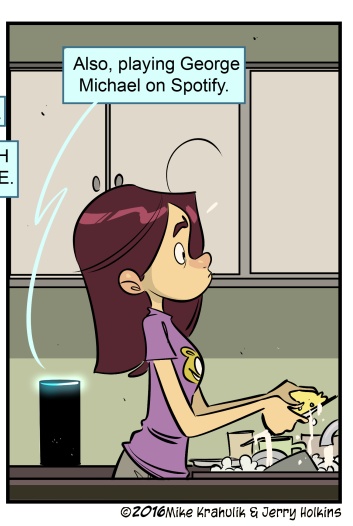 When I woke up this morning, someone asked me on the Tweetzor if today's strip was based on this story, where police think what an Amazon Echo may or may not have recorded might be the key to solving a murder. It wasn't; it really was that Kara got one for Christmas and, in fact, really does like it and does play George Michael songs on it. But the strip could also be referencing Cayla, and how she is your best friend, but she is also best friends with companies that do voiceprint analysis for the law enforcement, military, and intelligence communities.

I typically consign this stuff to the realm of paranoiac fantasy, and that's probably where it all still belongs; but global events turn on the dissemination of "private" conversations. People fret about this stuff constantly, one is always mere seconds from the accusation of a hot take. I just… really like science fiction. And if you told me you'd written a story about a doll that was the Trojan Horse for some kind of security state, I'd say that you had one upped George Orwell, who just had a two-way television in everyone's house. I'd say you had cooked up something authentically sinister, but had set up camp just on the border of the real - you'd manufactured a cautionary tale with an instructive payload, but (like six-legged euthanizing attack dogs) we need not worry about them in the literal sense.

Something that I love, by which I mean "hate," is that you can't really reference Orwell anymore. It's too on the nose, people are inured to it. The parallels are too numerous. If I were in charge of the NSA, the first thing I would do is found Facebook; they didn't even have to do that. A world where you can crowdsource your surveillance, where people will upload geotagged pictures after dutifully identifying every person in them must be incredible.