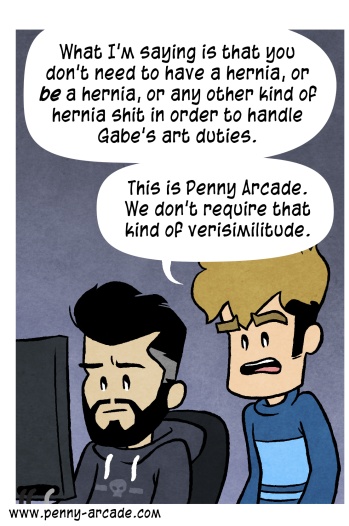 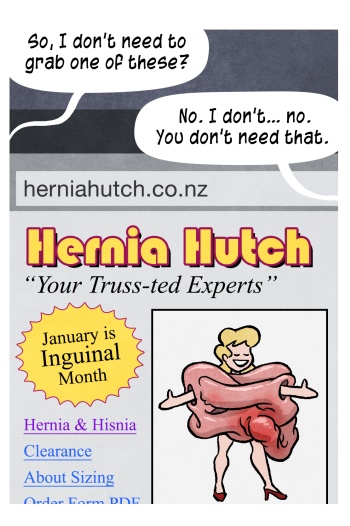 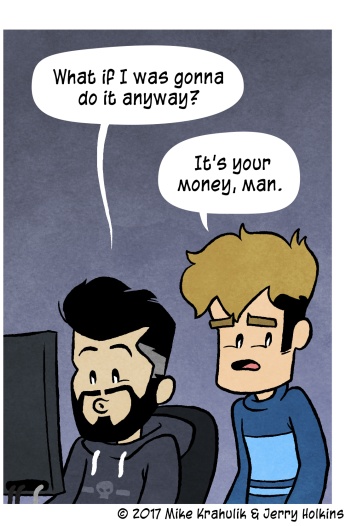 I'll be calling Mike Krahulik here in a sec to write new strips; my suspicion is that he will like having something else to do besides writhe on the couch. Or, at least something to do while he writhes, just to leaven the anguish.

But here's the truth: with Kris Straub at my side, I've been unleashed. Do you know how long I've been waiting to put the word verisimilitude in a Penny Arcade Strip? However long it's been since November 18th, 1998. Actually, please don't look for it, I probably managed to sneak that payload in at some point in the last twenty years.

The truth, of course, is that there are two gates that keep my worst propensities at bay: one is the three panel structure. I originally typed "stricture" there, a deviation that is meaningful. Devoid of art, they pretty clearly represent a prison. A word prison! This represents The First Gate. You can make that limitation a joke, but how many times could you actually get away with that?

The Second Gate is the person of Gabriel himself. He doesn't suffer fools, and I often comport myself in a manner that is foolish or fool-adjacent. But it's his labor that creates the strip, and I need to earn that labor. With Kris, and I'm not saying this is good or bad, it just is: I am myself, but with much greater density. If you ever listen to DLC: The Penny Arcade Podcast, (going by the capitalized letters, "The Dulcet Pap") you know that I'm always trying to jam diagrams into strips, and what's the first thing I did. Right? Overthinking things is a very Kris Straub trait, a fact I relate in love, and we talked for awhile about how maybe being hernial in some way is vital to performing "gabriel" in an art sense.