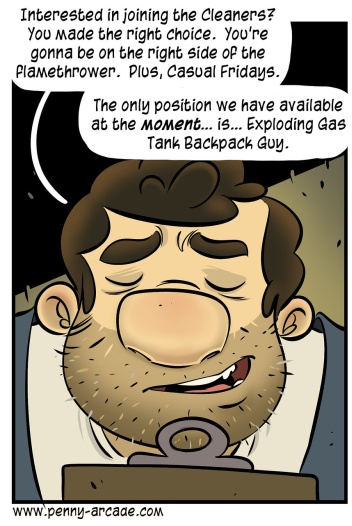 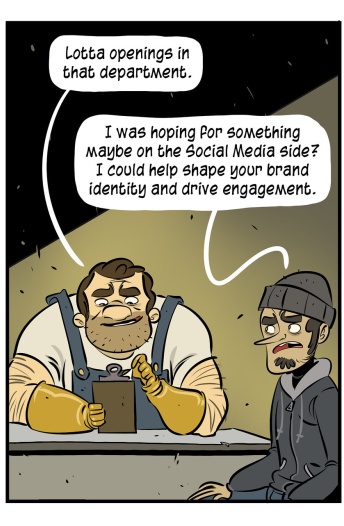 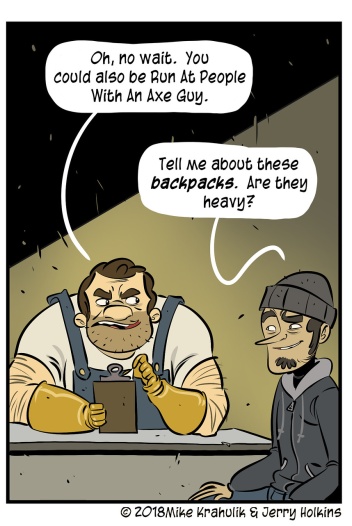 I think it's kind of funny to be doing Division strips this long after the fact, but that's where we're at. A PAX is typically sufficient to break the habit for a game, ironic though that may be; there's a kind of radius around the shows that absorbs all conscious attention.

I hope it doesn't happen this time, but if anything I've been more intrigued since I hit the level cap. I don't know the last time that happened in a game of this sort. There are multiple endgame activities with distinct contours, and a couple with their own levelling structures altogether. My current armor set reloads any weapon I switch away from, and since I use light machineguns with custom clips, each of which holds over two hundred shots, I never reload - there's just a slight pause every couple hundred rounds. We call this Operation Infinite Fire. It's no longer a stream of individual bullets and is closer to a coherent beam. But because set pieces can drop at any level of quality, good upgrades are always around the corner, even if I like what I've built.

So I'm always worried about breaking the habit - and in a game like this, letting people down because I've allowed myself to get outpaced gear-wise by the group. I think the hooks are in pretty deep, though. I mean, look at that last paragraph. Motherfucker sounds like a crazy person.

The last couple days have been exciting, in quotes. My connecting flight to San Antonio was cancelled, and the standbys fell through, so I'm writing this in a Dallas hotel Thursday night with an early morning flight into San Antonio which should technically be in time for the show. I have the family with me, too; if you see a redhead at the show somewhere, there's a good chance that they are either my wife or someone whose manufacture I directly participated in. The Three Day passes are gone, but there are a few individual day passes still available.