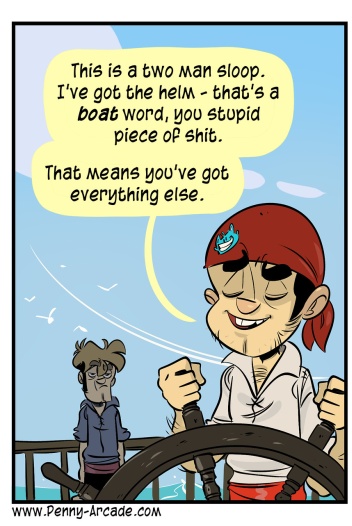 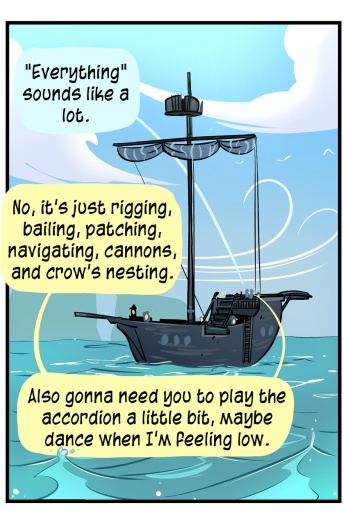 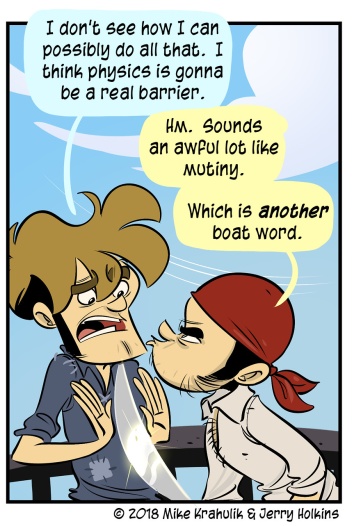 There was an issue for some people trying to access the Sea of Thieves preview of the game where it said they were Too Early or some shit; eventually that started working for Gabe so it felt safe to enter. It was not. I had the same error and no recourse I could see, except for in the reeking warrens of Reddit, where I learned that you could cancel your preorder and then order it from somewhere else and it would work. And it does work. But routing sales of your first party title away from your own digital store over to Amazon must be considered a colossal eff fest.

Of course I would put up with this kind of thing; that's my brand. I'm into "Bad Boys," game-wise. That Gabe endured it and then proceeded to praise the game to me is unheard of. The fantasy more or less is to sail a ship like in Black Flag, except the people running around out there on the deck are, for lack of a better term, people. Or, and I would also accept this, an action/arcade manifestation of Puzzle Pirates. Good God, that game was ahead of its time. But he had his whole family in there crewing one ship and he called me on the phone to tell me. Oh! I should probably say. He never calls me on the phone. There. Now that phrase has something approaching the gravity it was meant to.

We're gonna be checking out Sea of Thieves - I prefer to say "thiefs" - this afternoon during my customary Friday Afternoon Hang Out With Mike Stream from 2-4pm PST. He's bringing in his Xbox One X, and I was supposed to but literally everything I tried to accomplish this morning was fucked in some way, so it's sitting on the kitchen table in a place of prominence where "I could not possibly forget it." So I'll be playing it on the Xbox One, which should give you a solid point of comparison. The gulf between the two Xbox platforms is highly game dependent, so this might be pretty interesting. Here's a preview.