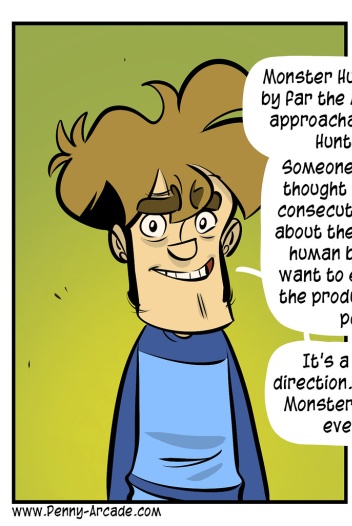 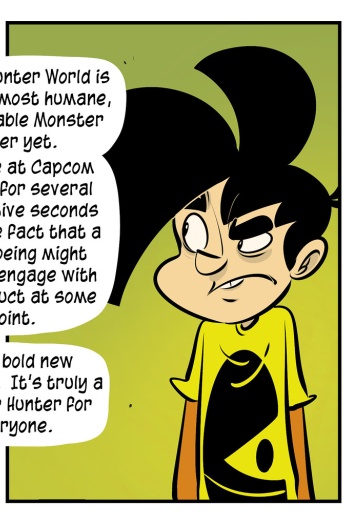 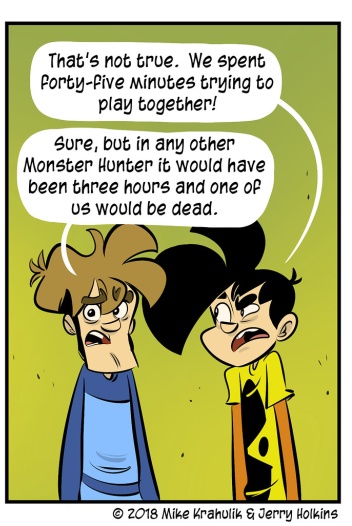 Something can be the most humane iteration of itself yet and still be a rubber band ball of sorcerous density.

Monster Hunter is a game whose composition doesn't lend itself to simple, amuse-bouche tier assessments of its character. Like the Monster Book Of Monsters, it is a beast about beasts. In the same way that everything in Minecraft is made up of blocks, everything important in Monster Hunter is made of guts. And you get those guts in the same way, by hacking at something until they fall out.

If Gil-Gadrib and I are playing Xenoblade Chronicles 2 on the stream, I feel very strongly that we should be trying to learn those systems along with you and trying to give you some pointers. There's a lot of elements and topples and bursts and shit. In Monster Hunter, I think you're supposed to come to the new world a little confused. I'm not saying they shouldn't help you - they do, much more I'd say than they have previously. All I'm suggesting is that it's not mean spirited. You have to learn to live here. The alternative is that you won't.

There is a lot of ritual and a lot of practice and a lot of systems and a lot of secrets. This is a game that game designers like, and you can tell because once you start playing it you're going to notice its plumage everywhere. I said it was a beast about beasts before, but the metaphor is further reinforced by the fact that people are always approaching this thing and shaving off a piece or two for their own shit.

The only question, really: is it worth it? You don't have a lot of skills that are going to transfer. This isn't a genre literacy test, the game is its own genre. Is it worth it to amass these skills, and are you given things to do with them once you have? Monster Hunter feels like a place you can go. They start the world simulation way, way down low, and you take it from there, interacting with a world whose physicality is never in question. Every weapon in Monster Hunter, every individual weapon, would be another game's entire combat philosophy. It has fourteen of them. You don't gotta start today, by any means. World isn't going anywhere, and they're only getting started with this shit. But, for real. You want in.

Josh just put the PA Presents stream we did for TinkerTurf on YouTube. There's a couple ways to approach it: it's a video detailing the virtues of a terrain offering currently on Kickstarter made by my friend Lane. But it was also an opportunity for Kiko to teach Acquisitions Intoxicated brewmaster Eric Benson and I how to play some Infinity, a game whose mechanics lend themselves to incredibly cinematic moments. Combined with cool terrain, you're basically playing these awesome little movies every turn. Come take a look!