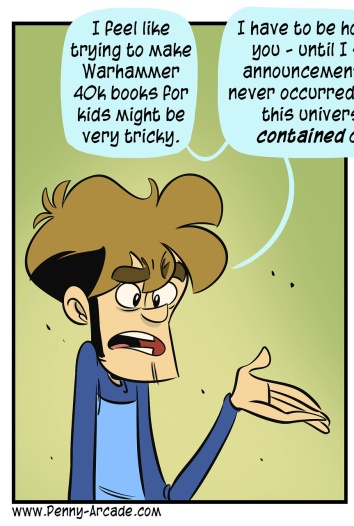 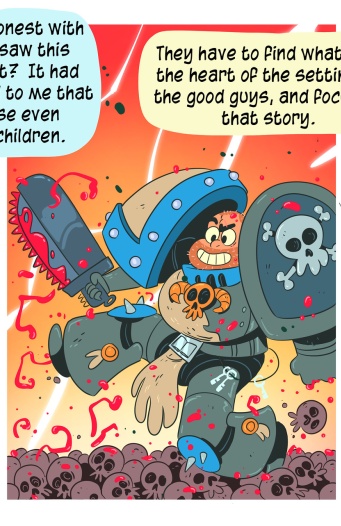 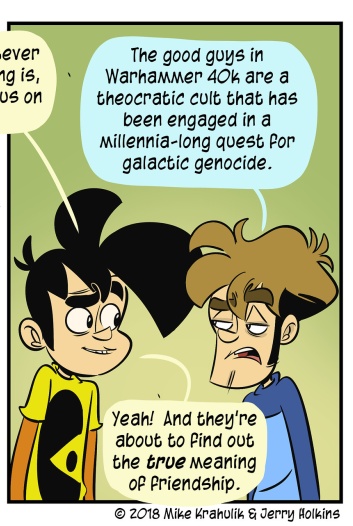 I've heard a bunch of really amazing shit about the new Warhammer 40k stuff; the last time I played my Necrons, games still took six hours. From friends, it sounds like it's hitting that ribald, skirmish scale that attracted me to Warmahordes and Infinity. And let me be clear: I feel like that was six hours well spent. I just don't have time like that all in a row these days. I'm willing to put up with a lot of horseshit when it comes to my tiny men, and I didn't mind how it comported itself mechanically. I was into it.

But it was the fluff that got me in the door.

A comic strip people claim to have enjoyed - claimed - called "I Hope You Like Text" is actually a strip about my affection for Game Workshop's whole dealio. I only know a thing or two about Warhammer Fantasy, whatever I was able to pick up from Warhammer: Age of Reckoning or Vermintide I guess, but 40k is so lore dense that it's a dangerous thing to dig into into when it's late. You want to plan how many hours you give over to this thing, and when, because this shit is good. The time is going to be spent either way. It's really a matter of when you want to get to bed. Not three? Okay Surrender yourself to it no later than ten.

GW is in kind of a renaissance right now, or in any case this is what people who like Warhammer keep telling me. When I heard that they were investing some of this newfound energy into a line of YA novels, it's like… that's weird? But I'm not mad at it...? I think this is probably going to be a hell of a challenge, but the more I think of it their world-building casts a long shadow, and there's plenty of room for a child to hide there.