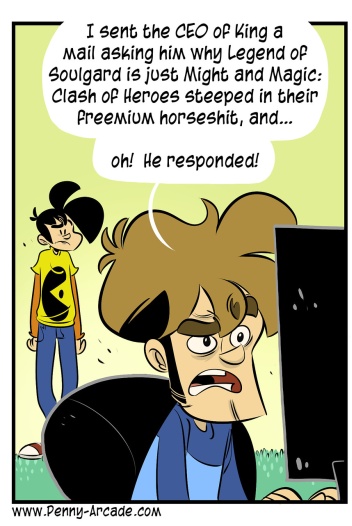 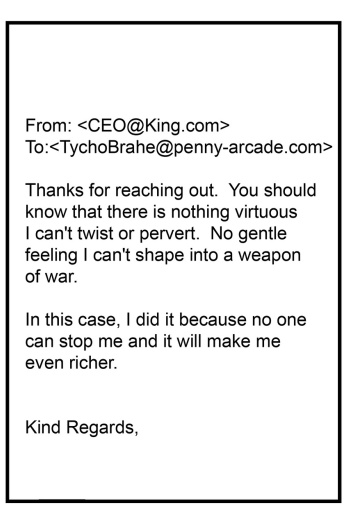 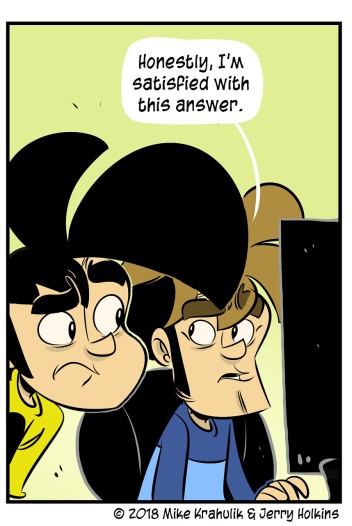 Gabriel was asking me about a game called Legend of Soulgard, not anything to do with the game proper, but a word he saw constantly in the lexical mist that surrounds the launch of any modern product. He wanted to know what they meant by "mid-core." I will tell you what I told him: "mid-core" means "a videogame."

The one concession I will make toward Legend of Soulgard is that they did not put two As in Soulgard. That's to their credit. I would have, even though it's immoral. This is why I can't be trusted with the launch codes. Beyond that, we may need custom language to even discuss this topic. We have the term Clone to describe an artless duplication, and I've argued that we're too free with the term; that "cloning" can also represent the founding of a coherent genre. But we may need a term the equivalent of Doppelganger to describe what's happening here.

Legend of Soulgard is a clone of the 2009 stunner Might and Magic: Clash of Heroes. Born on the DS, a "portable puzzle game tie-in for the Might and Magic brand" should have been an affront - an act of mercenary aggression. But since it was made by Capybara Games, this was instead a delicious misdirection. It was a tactics game that happened to be informed by savvy, effervescent puzzling.

Legend of Soulgard "inherits" this pedigree. I read a review somewhere that grapples with this concept - that Legend is really someone else's exhumed and necromantically animated idea - but ultimately decides that the mechanics they stole are super fun so it's fine. This is echoed in the comments afterward. The sense one emerges with is that so long as the vast and unaccountable "market" craves something, there is a virtue in offering it regardless of its provenance. I violently disagree.

I have been granted the merchandise banners by our merchandise manager Lidija, and dutifully I present them. FEAST: