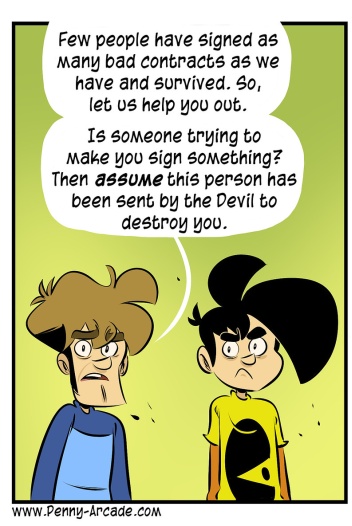 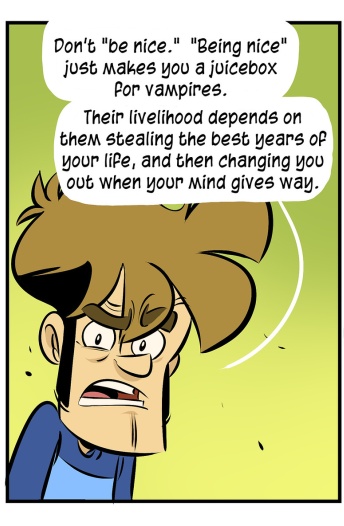 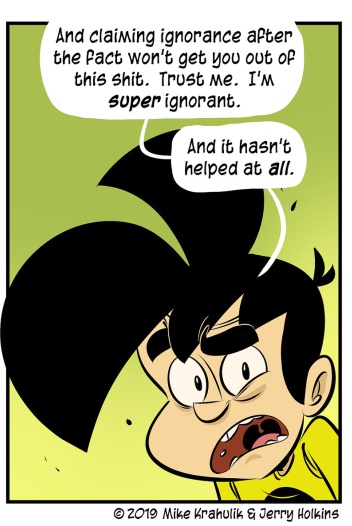 As we suggest in the strip, bad contracts and professional myopia are phenomena we know something about. Let me start with the first part, which is to say that you straight up, flat-out don't know how to read contracts. This is just what I was thinking about when it comes to something like the Tfue stuff, but he's already a multimillionaire and this was all pretext anyway. Social media enables a kind of mystical, extrajudicial space and there's no guarantee that's going to be extended to you in any way you're gonna like. Better to make sure your wards are in place ahead of time.

It's not like you and whoever wants to wring you out exist on some infinite abstract plain as pure equals, each turning a mystic key and launching your career. That is why this strip is named what it is. As media has become ever more atomized, the sole Creator has never been more powerful - but there's going to be times where working with someone else, maybe early on, still makes sense. Such deals should be very short. And you aren't being "hard to work with" when you ask to be co-equal in your own business dealings, however they might try to make you feel. You need to be okay walking away from a bad deal. You will learn a lot about your "partner," very quickly, the moment you are anything other than a mark.