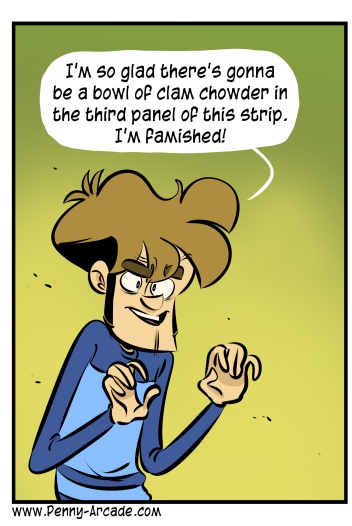 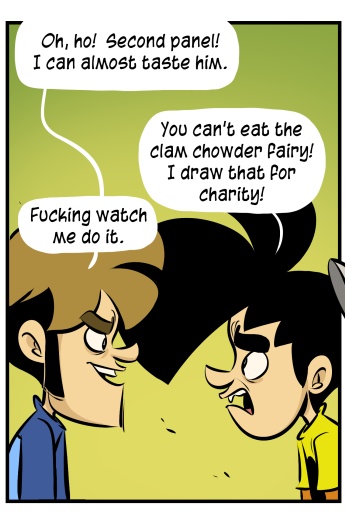 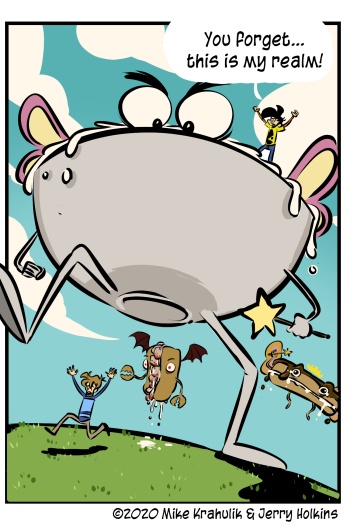 I didn't name the strip Lobsterian, Gabe did, but I probably would have named it Lobsterian given the opportunity. On one hand, I could be agitated that he is able to simulate me completely, further diminishing my efforts - but, man. That honestly strikes me as very good news. I get paid the exact same.

Somebody asked us either as a panel question or literally to my face - the morning after the show, I can't even distinguish - if we ever suffered from Writer's Block. The answer is "Yes, Obviously" on account of our frail human frames. Writer's Block isn't some personal failing, and it certainly isn't unique to the sufferer however it might feel. It's simply the inability, for a variety of reasons, to be a machine. When you put it like that, maybe it makes more sense. Personally, I think it's weird to be able to make strips.  We discussed this within the walls of a secret panel: woodworkers don't get, like, "table block" or some shit. They aren't like "Which ones are chairs again? You eat off chairs, right?!" Creative work is making something from nothing and then further refining the nothing-something you made into a something-something using a device you built in your own head out of thoughts and then decanting them with your body, which you literally haunt. It's surprising anybody can do anything.

The only material difference perhaps is that we still have to make a comic even if we have Writer's Block. It helps to have two of us; I've always been fascinated/intimidated by the sole proprietor. Our Writer's Block strips tend to feature food because making the strip is often the gate to being able to go to lunch, so that fixation grows until it becomes the work. This cupcake strip, this found cake strip, and The Bump are what it looks like when we have Writer's Block. The Bump is not about food of course. I've always had a soft spot for that strip for some reason, and it should be said: I'm not referring to the bump itself.

I had a lot of fun at this show, the last one for a while, which is good. A show a month is not… you know how some things are The Way? This is not the way. There's more to discuss, but that'll be for Gabe to get into. Thanks to Cooperative Innovations for letting us use Spaceteam VR for the Omegathon final round - after a bumpy start, we were able to have something like the match we intended to have a few years ago on the phone version, where eventually we were telling people in the audience to turn off their phones and shit to spare our precious Bluetooth which didn't work anyway.