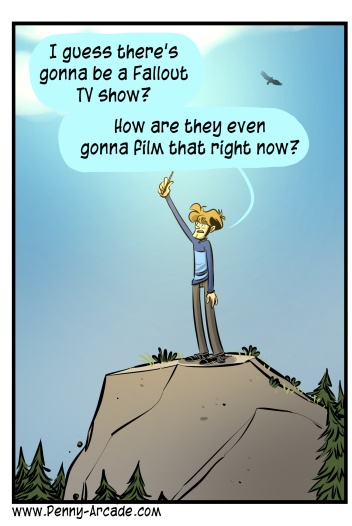 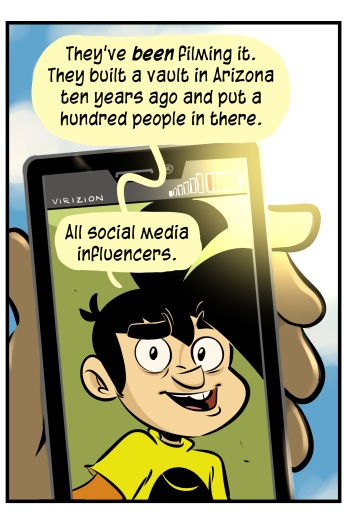 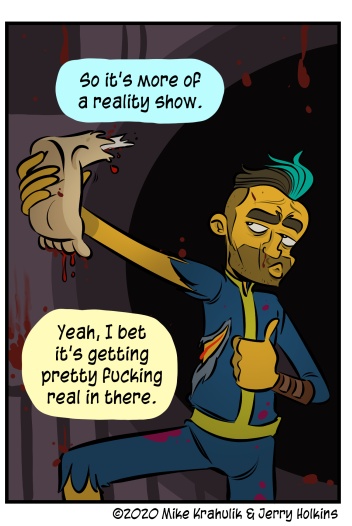 Fallout might be the perfect setting to grab if you wanted to make something that could truly cross over into the world where normal people lurk and throb. The overarching framework - a war of annihilation with China, an attenuated cultural inheritance everyone understands at cross purposes, and a tangle of subterranean nests running cultural experiments - has real fucking meat. I understand some of the scorpions are also quite large, so there's really something for everybody here. Plus, somebody already made one, and it was good. So we know it's possible.

I've seen a couple media announcements recently where it's been, like... when are you gonna film that? Or did you film it already, and we're just finding out? The people we know who operate in these contexts are in the mode now of just stacking ammunition for some future media war, a vibrating cadre of stymied Media Preppers laying up IP for some future age. Frankly, Fallout works as a governing metaphor for this also.

I have a hard time picturing what it looks like, this new time. I have gone out fully garbed and bemasked to pick up takeout, which I then wash in a river like a raccoon before eating it. I try to excise horror beyond that which is genuinely required, sand it down, but there's a lot of pretty normal stuff I consider completely beyond comprehension now and I think there's going to be a lag between when things are Okay Actually and when I Feel Like Things Are Okay. Personal fitness isn't a priority or even an interest for me anymore generally, I've had a lot of weird intellectual lifts the last few years, but I think I need to emphasize health right now just so I can see the science fiction this generation creates.