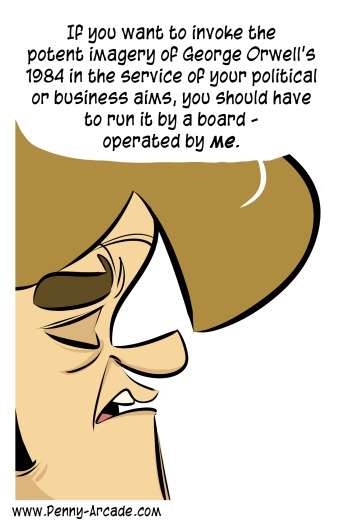 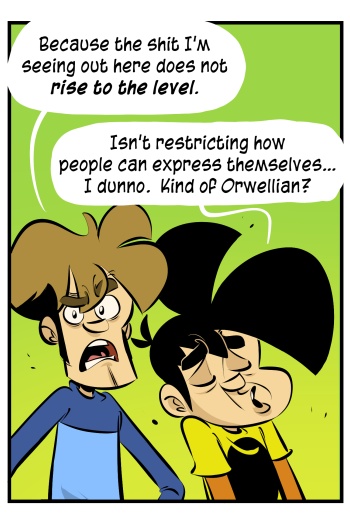 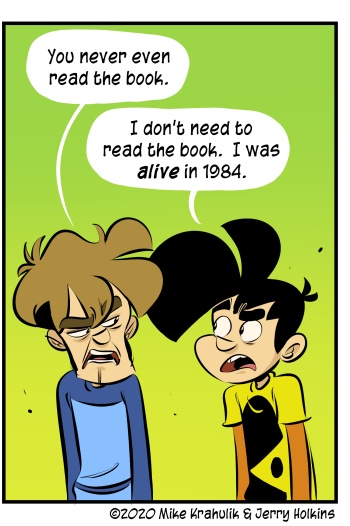 I feel like you get to choose a couple things to be precious about; for me, 1984 might be one of them.

Of course, we address the most obvious bit in the strip itself. But I don't think 1984 even maps onto the issue we're discussing here, and outside of some kinda gotcha for a thirty-five year old Apple ad I don't understand how Epic's belief that the split on the App Store is onerous has any correlation with a dehumanizing, all powerful state. It's gross. I think it's fucking gross.

It's unfortunate that we have so many opportunities to use the word Orwellian. The "Orwell" button is always being pressed. If it were a game, we would just tape that button down and go hang out at Todd's for a while, returning to find ourselves at the maximum level, hoping against hope we did not somehow end up at level -1 with our nascent godhood stripped away. Theoretically this level of creeping Orwellian dynamics should ramp up our awareness, but what happens instead is that each alert becomes less and less effective because we're incredibly stupid.

Apple's newest riposte, which was just announced, is decisive: on August 28th, "Apple will terminate all our developer accounts and cut Epic off from iOS and Mac development tools." And Epic is saying that it will hurt their business. Which is what they knew would happen when they did it, but they did it anyway, in a calculation only the profoundly wealthy can even consider, toward the furtherance of an outcome that will make it worthwhile retroactively.  I know a lot of people who would be happy with a better cut.  Did they expect the response to be this bad, I wonder? I bet if you get far enough down in Apple's EULA it says they can twist your head off and drink you like a juice box. I think we'll be surprised to learn the level of petty malice such gargantua are capable of.

It's like a Passion Play, featuring the Market Gods of this age, weaving law in the public square. And that's just the part of the story we can see.