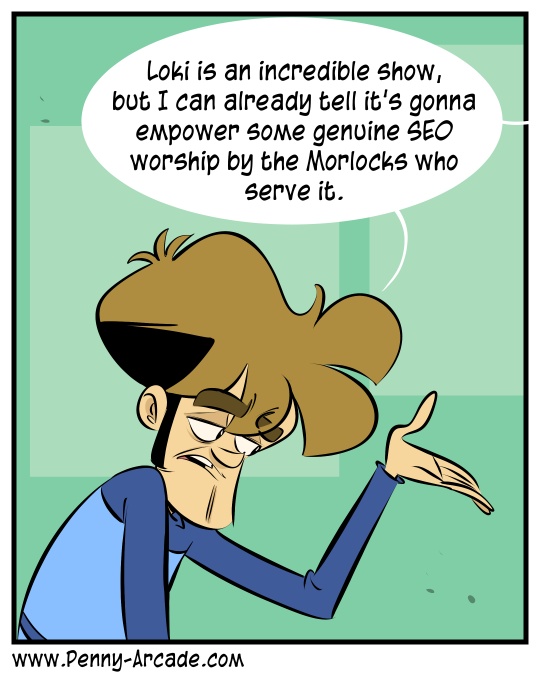 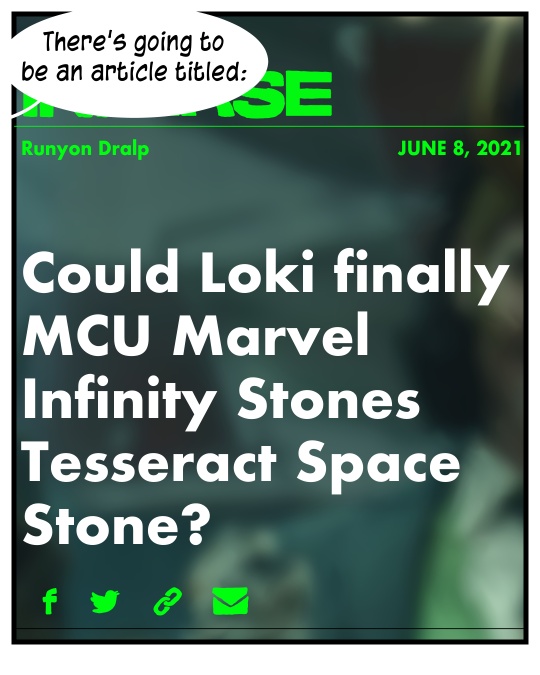 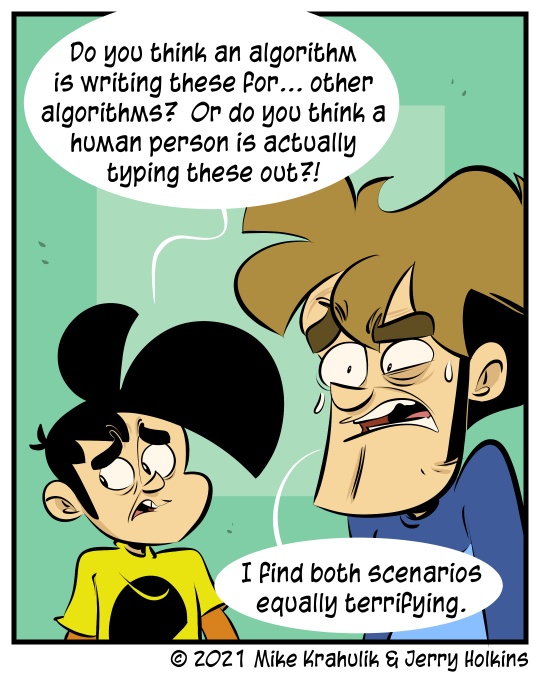 Loki is like Wandavision in that it's a kind of puzzle, which is the sort of show I like best. It's also the most optimized use of Disney+ as a platform, because now the hook is set and I sorta have to stick around to find out what this shit is about now. I go hog-ass fucking wild for a Primer, or a Memento. Or even a regular Mento. I should buy some Mentos.

I don't surf the Internet correctly. For one thing, I either ronically or i-ronically still use the term surf. I tend to go to individual sites for information; it's not really mediated by feeds or algo shenanigans. But until I got an Android phone a couple years ago, when I thought Google Fi would make travel to Canada and Australia more sensible, I hadn't been exposed to this bizarre underbelly of content whose provenance is difficult to discern. Content that essentially makes me feel like I'm going crazy reading it. There's a panel on my phone if you swipe left from the home screen that tells you what the algorithm really thinks of you, and what it thinks is that I want a bunch of articles which purport to have - but do not actually have - clear answers to increasingly granular horseshit.

These articles are like the broth you would make by filling a pot with water, looking at the water very intently, and thinking about a chicken. You'll get to the fifth paragraph of one of these, where you imagine the answer to the question posed by the headline might be, and find out that they don't have the answer either. They don't know if the new Ratchet & Clank is coming to PS4. Wandavision is what broke me, because it was bullshit ninety five percent of the time, just completely unmoored from reality. I was under the impression that these pieces constituted information - I thought they were someone's thoughts and ideas set down in a way that I could observe and process. Great pains had been taken to make them appear like communication.

These articles are essentially genuflections, completely empty ritualized movements and assertions, acts of worship for this devil we made. We have stories about Viziers for this fucking reason, about outsourcing our cognition, but now the feedback loop is essentially inescapable. I feel bad for the people who have to make these, but at the end of the day I'm glad someone is making money writing even if they're merely hanging a kind of linguistic drywall. It's not a choice they're making; the Internet has essentially been apportioned into fiefdoms and you have to sing these strange songs to be let in the gate. I'm essentially at the ragged end of a radicalization funnel, it just thinks that my belief system is The MCU. I don't think we can say that selectively pruning and breeding our attention in this way isn't twisting our heads around in a way that pop cultural ephemera isn't simply a proxy for.