Gabriel ("Makrak Khalilulelo") tried to finish this page Thursday Night, but he had to fly out to a wedding. We were both up very late as he tried to wrap it up, which had the character of our earliest efforts and I enjoyed it even though I felt bad that he had committed to the impossible. Ultimately the realization that certain properties of linear time made his task very frustrating (if not simply incompatible with reality) caused him to kill it, but when he got back into the office from his trip it was all he wanted to do. Occasionally, one must let one's artist tug a bit on the reins. 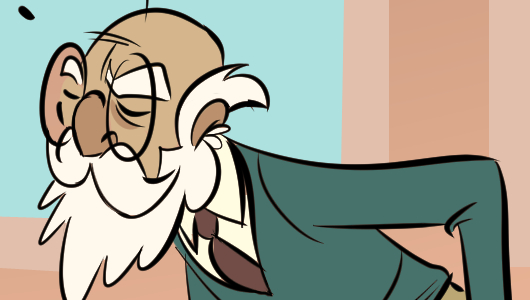 It was a very cool wedding though, as I understand it; the person he based Annarchy on had never been married before, and yet she was already very good at it. The traditional father/daughter dance devolved into a choreographed lightsaber battle, apparently - no doubt "Insta" was ablaze with it. I attended a wedding also, and though no sabers were drawn and no galactic fates decided the hors d'oeuvres banged like a cue ball in a dryer. Eventually, it was some Scylla and Charybdis shit; if I had it in my mind to avoid the open bar, I was thrust into the arms of the chimichurri chicken skewers. If I chose to give the shaved meats a wide berth, I was invariably plunged into an icy bin dense with microbrews. It was fraught, kid.

Oh! But, Nightlight. Maybe this will be an annual thing; as a Father's Day thing it would certainly be on brand. I could work with that, because now I want to do all the rest of it. I know where it goes next because that's my thing: Gabe shows me a picture and tells me an idea he's got and then the slack capacity of my nanofoundries shift into operation. It is very good that we found each other because the alternative is unthinkable. I would not be writing this to you, now. I would be eating what was left of an opossum while yelling at people who were also trying to eat the same opossum I was.

I do sometimes wonder if we'll have a chance to stick around on one of these projects at some point. I mean, we have a few things in the works right now to try and do that, for a few of them at least, but still. I would love to stay and actually colonize one of these Goddamn worlds sometime.