For a long time, you could make the case that - no matter the role - that Nolan North was basically playing Nolan North. Because this is the Internet, I have to append this suffix; I'm not even saying this is a bad thing. I like Nolan North. I mean, I don't know him, but I like his whole thing. Nolan North as the Ghost in Destiny though is a sometimes energetic, sometimes fragile, always a little nervous thing. It's great. He also has the best line in the new Destiny, at least from my perspective. 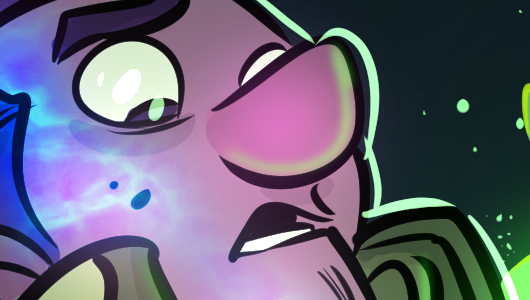 There are these evil balls you need to open doors sometimes, called Tomb Husks - the balls are the husks, not the doors - and they are the Needed Object to progress. Sometimes, when you grab one, your Ghost says that "It is better to have a Tomb Husk and not need it than to need a Tomb Husk and not have it." It is simultaneously true and also takes the entire notion of a Tomb Husk grates it into confetti. But that combination of words is too funny, sorry. When we were playing a quest that required them the other night, we started to wonder about their origins and what structures we were reifying by being party to their use.

I had dropped out of the group pretty hard before the expansion, my dedication has always been in question, but I had to Witch almost constantly to bring that sitch to fruition. I told them that I was a "rolling stone," which "makes it difficult for moss and lichens to attach and thrive" but they weren't feeling my flavor. It's possible they didn't like being the "moss" in that euphemism. But I got into the group after they already had the two extant raids on lock, I was filling a hole in the group, but the crew was already deeply professionalized. Coming into a brand new one with no FAQ and no YouTube guru to firmly delineate the rituals is something I'm pretty excited about, even though my experience with previous raids has shown them to be warrens of absolutely the worst kind of bullshit treachery.