In The Taken King, you can jump into a "Strike Playlist." For the uninitiated, it means that you strap into a kind of electronic ride where you are slotted with your team into a functionally endless string of mini-raids. This roster isn't super deep, but there are a few different ways for them to go down so it's mostly okay. For the players, I mean. They're fine. They get a steady stream of forgotten, borderline mystical hats. 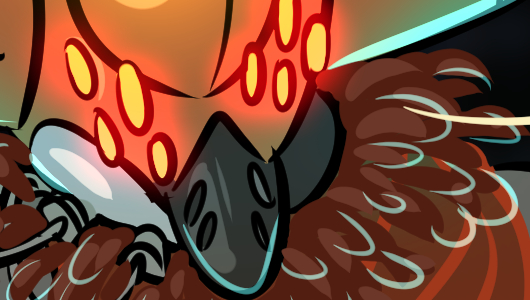 But what about the bosses? How do they maintain morale in such a high traffic retail scenario? Friends, it's all about attitude.

I was going to suggest to Gabriel that Taniks the Scarred be clapping with his weird little bonus hands, but I thought, no, that's not gonna fly probably; and then, when I got the strip, he was clapping with his fucking bonus hands! What this means to me is that if I remain perfectly motionless, I will still get everything I want. Right now, I am perfectly still except for the fingers I am wriggling to write this. Soon, I will achieve even greater stillness.

Child's Play has, as of this second, raised $34,327,046 over its lifespan. I could refresh the official page and there is every chance that it would be more than that; I've refreshed it several times while writing this and it has been true at every juncture.

Child's Play is about as focused a charity beam as it is possible to muster, particularly when using the official map: you choose something the hospital has told us they need, and it gets sent there. That's the traditional way. We've branched out in recent years, in an effort to be good stewards of the resources you've entrusted us with, but that's always the spine of it, for me at least: the one to one nature of that exchange.

Jamie is kicking off the 2015 drive with her post, which will no doubt include a mention of the Child's Play Charity Dinner & Auction taking place on December 10th, for which both individual tickets and sponsored tables are available. I suspect she will also tell you that November 14th marks the start of LoadingReadyRun's terrifying annual charity juggernaut Desert Bus. You can also read about the Gamers Give Back tour we're setting up, feast on new ways to support the charity, and generally get yourself situated on the charitable starting line.