The original plan was to start running these next week, when were en route/at/leaving PAX Aus, but something came up that I'll let him tell you about. Long story short, getting ahead on the strip turned out to be a pretty Goddamn good idea. 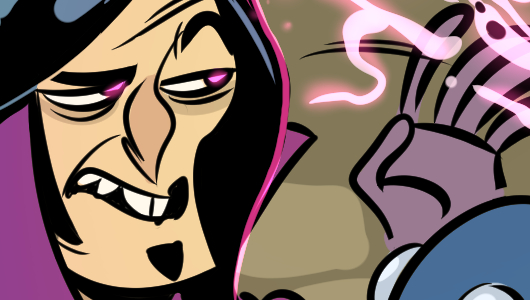 I've been saying that "this is the year of Acquisitions Incorporated" for about five years now, but this is turning out to be the actual year of it. The first part of that is the store. Operated by our friend and ally Scott Kurtz, also known as Binwin Bronzebottom, you can expect a few new things to pop up there over the year, including an awesome parody of a game screen I wrote which is game agnostic because it includes no useful information whatsoever. There's two more things in the works that will truly inaugurate this as the Year of Acquisitions Incorporated, but I don't want to say too much, so that the universe has a chance to crush it. Suffice it to say that if you are down with acquiring things in an incorporated way, you are about to be rewarded richly for that allegiance.

There are PAXes I attend where being Omin is more meaningful to people than being Tycho, which I find fascinating. It's fun to make stories about AcqInc, to try and take off the cuff stuff we've been doing for like ten years and figure out how it looks codified. Scott does it differently than we do, and I like that. There's room for all of it. Some of the posts for Vault of Wyntyr pretend to be real module content, and that's a pretty fun form too. In any case, I hope you enjoy Acquisitors.

I have two crazy Pinny Arcade announcements I'm going to paste here from Brian and Kiko; they are beyond cray. They are whatever the thing is after cray. We are navigating the treacherous conceptual waters of a post-cray world.

We made an Armadeaddon blind box set for Pinny Arcade. I think that statement is pretty exciting. And if that alone is enough for you… here is a picture of the full thing. You can just go buy some right now if you want to. Indeed, we’re encouraging you to do just that by making them in limited quantities and with a special launch price on the boxes.

But maybe you have some more questions about this whole Blind Box thing. Maybe you’re suspicious, or just interested. Well, I’ll try to answer some of your questions here!

Are these Limited Edition?
Yes. We made a specific number and will never make more. Of this set. But… if this is a concept that Pinny Arcade fans like, we’ll do other blind box sets in the future.

Why blind boxes?
We like the game of collecting. Getting things, opening them. Figuring out what we've got and what we need. Pulling apart card packs. Or opening boxes and tearing foil bags open. Then bargaining, trading, or doing it all some more to complete the set. Its really satisfying and fun for us. And we figured we weren't alone.

Why Armadeaddon?
Uh… nobody will really ask this question, right? It was the obvious choice for the first Blind Box set. I think it took us about .36 seconds to make that decision. Frank! Charles! And what HAS to be the definitive Annarchy pin. A gross cup full of zombie parts! Just… …! ….OK?!?

Why now?
Halloween is coming, so it seemed to fit. It also lets collectors buy the annual Halloween pin set at the same time.

See what I mean? There is a cat with a kerchief!!!