Because Gabe, who is also Mike, is now a 24/7 vomit fountain, we're going to alter some of the panels. In the future, maybe we can have a panel that focuses on vomit and engages all sides of the vomit debate, though I suspect we may have to find a place that sells Purell and tarps wholesale.

- The Two Q&A Panels are now Khoo And A panels! Robert and I are going to handle them as a duo. As such, we've got a new Q&A form if you'd like to ask Robert questions directly, which is a pretty rare opportunity. He knows a lot of shit.

- For Saturday's Make A Strip Panel, and Sunday's Child's Play Auction and Omegathon Final Round I will be accompanied by Kris Straub, he of the Chainsawsuit and the Broodhollow and the Starslip, if you're old school. He's a good friend, and I was always glad he was coming down for the show, but now I'm really really glad.

For signings, we're gonna do a special print of the program cover, and have Mike presign a bunch of them. We'll have three hundred signatures per signing ready to go, which should be able to satisfy most people? I can also do a very convincing Gabe signature if pressed! Let me know which you prefer. We'll pass out his special pin - sometimes called a "boss pin" - to our folks, and they won't count against your "official trades" as per the rules.

I'll see you next week, though I may still be enduring prophetic visions as a result of my prolonged sky journey. Even that is a boon for you, though. Take this opportunity to ask me questions about your future, and I will pierce the veil of time for you free of charge. 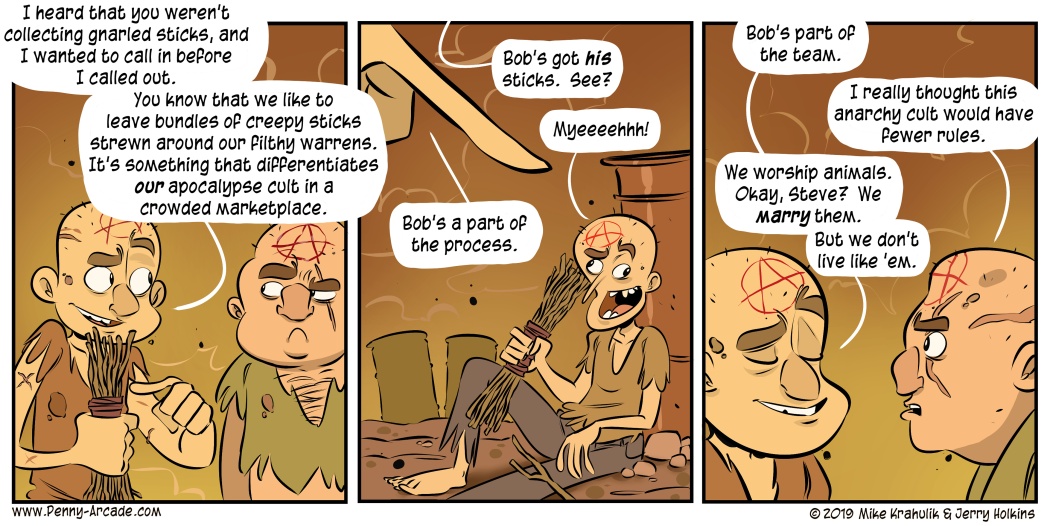