We've both played it off and on, but now that I'm home from Aus and Desert Bus I want to make it Dishonored 2 an authentic dealio. I think I have the basics down. 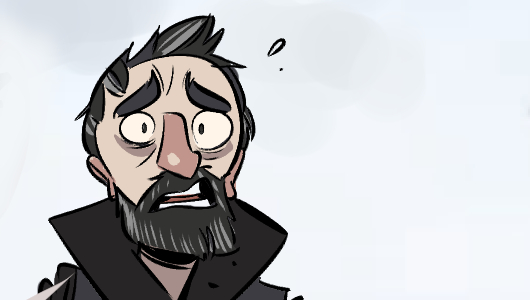 My favorite stealth games all have legibility as a prime goal; it's not an accident why I like them. I Am Jack's Enthusiasm For The Borderline Unintelligible, Fence-Swinging Gameplay Aspiration, but for some reason it doesn't apply to sneaking. Klei's Mark of the Ninja is an exemplar, there. The whole game is designed, first and foremost, to make your meaning in the environment clear. All of that being established, you might think I'd have high praise for Invisible, Inc. also, but I can't recommend that game - at all. I don't have anything against it, I just haven't played it. I saw it in the Indie Megabooth a couple years ago, vowed to keep an eye on it, but it simmered for awhile in the service of becoming excellent and I ended up renting that mental space out in the interim. Splinter Cell, in either of its genius incarnations, is a high watermark and may be the apex for me. Being third person helps in games which are about sightlines and relative position.

Dishonored had a lot of first person hiding in well-lit places. I couldn't read these (incredibly beautiful, substantial, profoundly realized) environments the way I needed to at the time. A lot of the sneakery in that game is about powers, powers that would break any other game in the genre, and I was trying to play it as a game it wasn't. First person stealth isn't my favorite; I'm always getting caught by people who my ordinary senses would have been revealed as, you know, present. Such events are bioaccumulative; eventually enough of them accrue, and the mouse pointer hesitates over the icon. This is death, for a game. I want to see, this time around, if there is a part of myself I can shift to increase my Match.com compatibility with this shit.

There isn't any reason in particular that you should know it; I had to be reminded by a reader myself. But we have been doing whatever this is for eighteen years, today. It's weird to think of all the things it's become: a comic, occasionally even more than one comic, it is now a convention and a charity, occasionally a reality show, and I have another alter ego as the CEO of Acquisitions Incorporated. Depending on the time and place, I'm better recognized as Omin Dran or one of "The Creators" on Strip Search than I am as Tycho. But I like being Tycho; I appreciate the opportunity to have served you in that guise the longest. I'm not a person who feels truly comfortable anywhere but in front of this page, and I feel like this is something you gave me. So, thank you.