We've been Twitching constantly lately, but we've also been streaming games and other stuff from the office. I'm hooked on it. Wild dogs couldn't drag me away. Well, they probably could. I guess it depends on how many wild dogs. In truth, any value for wildDogs over 1 is probably a deal breaker. But I do like hanging out on there, and hopefully it provides some subtle nutrient for those who gather there. 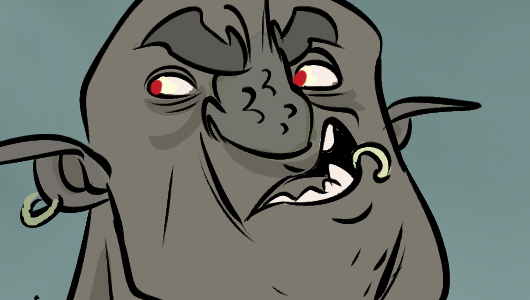 We've played Shadow of Mordor: Game of the Year Edition (GOTYE…?) the last couple times. It's not new or anything, that's true; but if you had a PS4 Pro, as our Gabriel does, you might want something uprezzed with new graphical effects, but in a game you're already familiar with so the delta is apparent. You might also want a game where you trip a person and pull them down onto a sharp sword! Imagine that there is a single game that does all this. And it's still rad! The game is still fucking rad.

One of the things that continues to stoke this rad furnace, maybe even the thing, is that "Nemesis System" thing that is constantly birthing a moist menagerie of motivated foes. I'm confident that we don't play the game correctly; of course, if we're having fun, it doesn't really matter. But we play the game as though Mordor were a kind of skate park, where our haunted-ass ranger is the board and this ready supply of orcs are the rails and ramps. We die all the time, because we're mostly trying to do cool tricks, which results in a flow of new blood perpetually being pumped into their ranks. This engine they've made is amazing when you are home playing it at night in the dark, but in a context where people are watching it happen the little stories it creates are hilarious and addictive. In one play session, Kuga Blood-Licker came back several times, each time more fucked up than the last, until he became a kind of folk hero to the stream and no doubt to orc-kind; the urge to immortalize him eventually became too strong to resist.