As you might have read, our own Gabriel - whose handle I will not corrupt this time, out of deference for his ruined state - got all fucked up over the weekend. He called me Monday on my way home from work; he sounded like shit, and it was very difficult to hear. I mean, he was perfectly audible, I just didn't like it. As soon as I found out he was ensconced firmly within the Bone Zone I called my friend and colleague Kris Straub, who had backed me up before when Gabriel's frail humanoform gave way a couple years ago. I brought him "back in," as it sometimes said, and we had a pretty good time. I had a good time, at any rate. Me and the Cloister of the Crimson Arc. Kris mostly mewled as his body was made the gate for the Comic Beast. 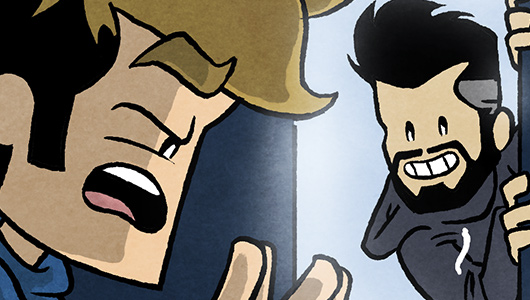 Before Penny Arcade was really a thing that anybody knew about, Brenna saw our writing process for the strip which - at that time - involved eating cookies and rolling around on the ground. I don't say that for your amusement. We would buy a box of cookies at Safeway and then for some reason we'd gotten it into our heads that comic material floated very near the ground, like a heavy gas. That ancient ritual got rolled into the strip somehow. Kris will be with us Friday as well, stay tuned, hopefully Morak Khandalar will have regained some measure of his function by Monday.

Wanted to mention the Acquisitions Incorporated Holiday Special, as judging by my Tweetzone people are still finding it. Free with Amazon Prime in selected regions, otherwise five bucks there and anywhere else. I mean, technically there's an SD option for three bucks, but it's like… you know… SD. (shivers)

Anywhere else, we've got you covered on Vimeo.