We made a snipperstrip about Snipperclips. 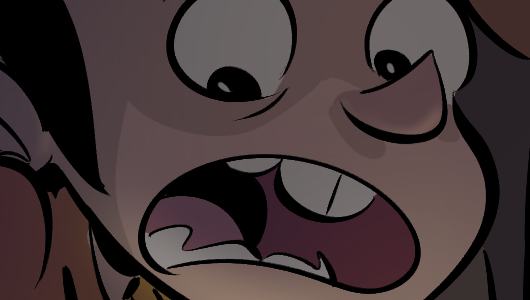 What I love about Snipperclips is that I can't really explain it in purely genetic terms. Right? Bulletstorm is Unreal plus Tony Hawk, that sort of thing. Here's what it is, or what your first impression of it will be anyway: it's a cooperative, creative game at its core where you snip shapes out of your partner to transform their weird little nubbin body into a useful tool to solve puzzles.

You can show a person Zelda, but you can't play Zelda with them. Of course, when I sit down with Gabe and he's playing Zelda, I'm basically telling him everything he should do. So, maybe that isn't entirely true. I'm playing him and he's playing Zelda, maybe. Snipperclips, though, we don't need to euphemize at all: the scenario in the strip is real, I've seen it. They've made a game - and Nintendo has made a system - that you can share, in the manner of a snack. This feels new.

Talking to Gavin, he expected - as I did - that the twenty dollar price tag meant something about how much stuff there might be to do in the game. Except, inexplicably, the more stuff you do the more stuff there is to do. My mission is to make the Snipperclips attach rate for the Nintendo Switch 1 to 1.

PAX has always been a profound context for Nintendo handhelds, one of the only places where their social functionality actually socially functions. It was a test of the newly released Switch platform as well, this time: I saw a bunch of people playing them on the planes to and from, and each had a different way of using it that felt right to them: one held the entire device with the controllers snapped on, one laid it on the tray and played with the controllers separate, one had the kickstand and a Pro Controller… same platform, but all these intersections and use cases. I saw people in lines playing it solo and multiplayer. There's no ready "bin" for this device, conceptually. I have had to make space in my mind, and perhaps even my heart.