Kiko asked me if Star Trek: Bridge Crew was VR's "Killer App." I could hear the quotation marks around Killer App; he was trying to create a kind of ironic gully around the term. But he also really wanted to know if it was the Killer App. I'll tell you what I told him. 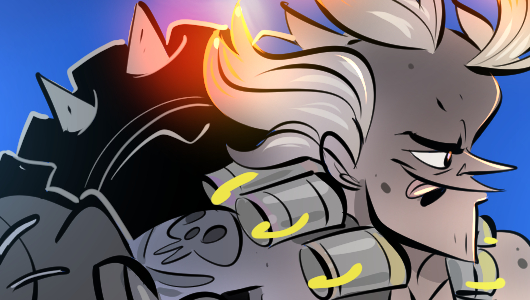 Most VR games, for many resons, are single player experiences. We've gone into why a couple times; what I understand from those trying to plough up this space is that the current rate of hardware adoption alone makes a multiplayer offering a dangerous proposition. But we're also still figuring out what it means for a single person to be ensouled in that place, mapping our perceptions and actions to it in a way that is believable and not nauseating. A multiuser space has challenges on top of that. It also has a profound potential that Star Trek: Bridge Crew reveals with aplomb.

Something we're getting at in the strip is that many, many people globally have all literally trained their whole lives for this. It would be like if there had been a show that ran for hundreds and hundreds of episodes over multiple generations of people where the main characters were a Mid Laner, a Support, a Jungler, and an ADC. I would watch that show. But the archetypes are seared into precisely the type of person who would purchase a game called Star Trek: Bridge Crew. I literally said the lines in the last panel. With my M-Z, or "mouth zone." And nobody gave me shit about it, because they were on it too. I once saw the Pieta, and was driven to my knees. When in Rome, right? The bridge of a starship exerts a similar quality, it turns out; even a rando who wants to grief feels somehow compelled to contextualize their bullshit appropriately.

DLC has a complex reputation, but sometimes I will stop breathing I'm thinking about this game's potential DLC so hard. I don't want anything but "seasons" of shows - I want a story about piloting a Defiant class ship. I want a story where we play as Klingons aboard… well, you know what kind of ship. And then, once that modelling is complete, I'm gonna need a DLC where we can pilot crews against each other. Then I will purchase an IV stand and time travel to the twenty-third century, the only way it is possible to do so.