There is a lot to like about Labo, which is firmly indicated by the amount of pixels emitted in its praise. The thing that excites me the most is that the first two boxes have the subtitle Toy-Con 1 and Toy-Con 2. What I want more than anything is a Toy-Con to be followed by more and more numbers. We have submitted a possible Toy-Con 3 option but we're easy; it doesn't have to be exactly like this but it's one idea and you're welcome to it. 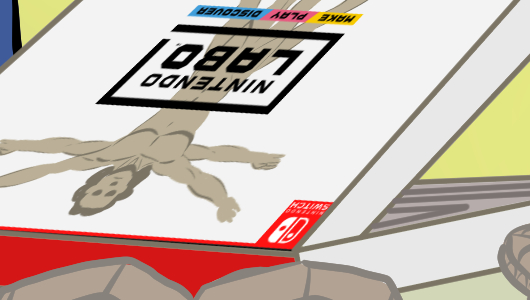 There's a division of "labo" at my house, and I don't know if its common. I haven't been able to get anywhere near the sheets themselves - that's fallen almost entirely to Elliot, who emerged blinkingly from the basement with a fully manufactured cardboard piano. Some Toy-Con make use of reflective stickers and some don't, and this one uses a bunch - on the little bolts you insert to change the sound, there are these little shinies that not only indicate which sound it represents, but also if it is being turned to modify the tone. But the construction of the device, followed by a quick test run to determine if it has been constructed correctly, is the play.

Now he's done with it, unless he can find a way to break it in a way he finds interesting.

Ronia is now situated at the end of a conveyor belt where new toys arrive at a regular pace. Elliot puts them together and then retreats to observe the dankest maymays. Ronia wants to stay in there and master them, and she has; the base fishing pole can't handle her style. Ultimately, the handle came off so many times she's begun to use a new grip: she just spins the mechanism directly, and as a result, fish have come to know fear. There's just enough game there to discover, and for a young player building their skills its intoxicating. The secondary detonations of content and creativity are just… continuous with this thing.