I think a lot of people must have this problem, at least, I hope they do, because it will make me stand out less: I have a tendency to to get infected by accents. It's not something I'm trying to do, I don't think it's, like… funny or something, I just have to do it. I just got back from PAX Aus, what I would describe as "the best PAX Aus of all time," and after a few days there it's almost impossible for me not to stretch a long O out way, way, too far. Criminally far. Like "if you could lace an O on the rods of a taffy puller" sort of vowell extension. It's decadent, in its way. 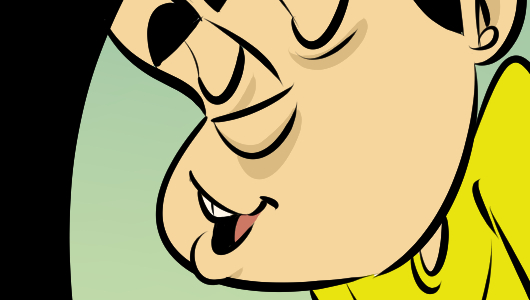 I heard something new there this time, because in their quest to expose me to every strata of Australian delicacy Enforcers had a Halal Snack Pack brought in. You should go to the link, probably, but Gyro Fries are a near analogue and I think that poutine is the sort of thing an HSP might see at a sufficiently large family reunion. Anyway: you know how you can be talking to a person you think you know, and know well, and then all the sudden they pronounce the letter Z like "zed" and in a flash you know them to be a scheming Northron?

There's never been a situation where I've had an Australian just recite the whole alphabet, that just… never came up, so it was very surprising to hear Kwaizy - who I have known for years upon years - pronounce the noble, gentle letter H like "haitch." I stumbled out into the street, barely missing a passing carriage. Had it all been a lie?

I was also offered, and did subsequently consume, a "snot block." This was a banner year, truly.

In terms of linguistic infection, the inflection - "inflection" is quite a good term for this actually. Huh. I think I'll name the strip that. Anyway, the inflection of the untamed West is addictive as fuck. It started about twenty minutes into playing the game last Thursday and I think I still have it.