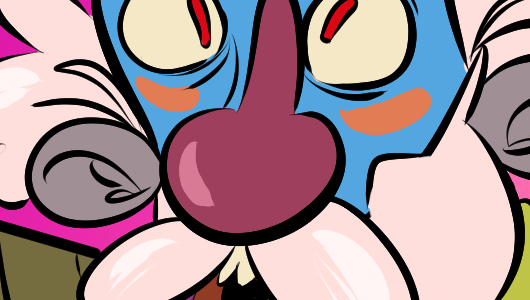 It seems like I'm gonna have to plug in, charge, and subsequently use an inactive iPhone just to play this Goddamn Apple Arcade shit. I'm fucking nuts about Capy; hey kick ass all the time. It's almost a hundred percent fully-kicked ass with these guys, except for Below, which I tried my Goddamnedest to like but I think in the end it didn't like me. They have a particular genius for making puzzle games that look, superficially, like something that would be profoundly okay. And then you play them for a little while and the skin of your face rolls up like a blind and beams start shooting out of all your holes. Might & Magic: Clash of Heroes is an especially good example. It looks like a match three thing until you realize they made a wargame out of marshaling troops. It's fucked.

Grindstone has seized my companion, and more than any of the other cool things in there it's the one that has me considering digging that iPhone out. Like I said before, I've been trained completely away from using a phone as a gaming device. I'd much rather siphon some indie freak shit into my Switch and stop playing it when I'm done as opposed to getting trained to serve Baal or whatever the fuck they're teaching my nervous system to do in most mobile games. Grindstone has interesting, deliberate matchy-puzzley shit with light crafting. And that's just the part I know about, the part whose firm proboscis has juiceboxed my compatriot. Ready to play, now. Ready to know more.

I won't be jumping on the Stramp this afternoon because we're filming the last few episodes of our official Vampire: The Masquerade chronicle, Seattle By Night. It's been really great working with Jasmine "ThatBronzeGirl" Bhullar. I can't remember if I said it last time, or just thought it in my head, but she's the sort of person where, before you're even done with the thing you're working on together, it's like… What are we doing next? And when? Is sooner possible.