I've been present for the aftermath of so many shows that it's very startling how gone it is and how quickly it is gone. You keep thinking, or… I guess, I keep thinking, that when something like this happens there's gonna be some kind of echo that blooms in physical space, some platinum tracery midair, some mark. As it is, it's like I like through five seasonally appropriate editions of A Christmas Carol a year, and then it all evaporates to the extent that I can hardly prove it was there.  I hope I'm learning whatever all these ghosts were trying to teach me. 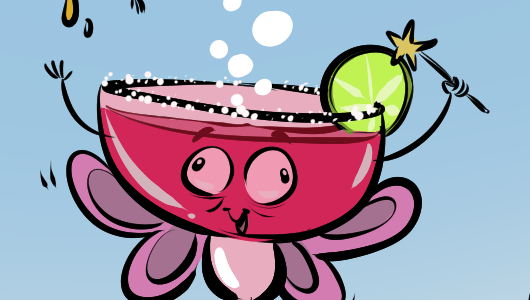 I saw so much cool shit at this show. The other PAXes exist at such profound scale that I typically have to preselect what I'm going to see before I hit the floor, purely as a matter of self preservation. There are several conventions occurring simultaneously at every PAX, as I often suggest: multiple shows worth of content sprankled with the denizens unique to each of these multiplexed biomes. Outside of main panel content, I think it's possible to see everything at South and I think I did. I took notes the whole time, that's how much stuff - I was afraid I'd forget. I'll dispense it over the rest of the week when the act of decompressing it doesn't feel like it would give me a concussion.

I also learned that there is such a thing as a prickly pear margarita, and that such margaritas can be secured, yea, even unto the "thirsty-two ounce" which they serve in a decommissioned missile silo. Here's the Make A Strip strip, and Gabriel had enough time at the end to muse on a series of PAX South appropriate faeries.

Super fast turnaround from Josh on the Acquisitions Incorporated game from South, which I'm already pleased to offer on YouTube:

Gabriel suggested of this table that this must be what it feels like to be in a band, and I've been in a band - more than one - and I can verify that. I've never gotten more compliments after a show than this one - see what you think.