I feel for Ron. I don't even experience it anymore, to be honest - that… omnipresent malevolence. I'm conscious of it but it doesn't really touch me. I'm sure that's bad. I'm probably not the best person to ever draw breath, but purely as a ratio I've invested those breaths in other people more than I have myself. Eventually the caricatures become so cartoonish that it's a trivial matter to distinguish them from the truth. 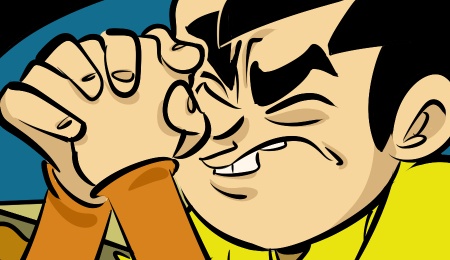 Over the weekend, we did a hashtag sponsored stream for the Snap Ships Tactics Kickstarter, which funded in its first day. Because we customized my ship and played a full 2v2, we didn't have a chance to get into how an AI deck can pilot enemy ships making it fully solo or co-op, or future plans for campaign play. But you might enjoy the stream, where you can also catch a glimpse of Gabe's incredibly tall son, and maybe stop by the campaign:

Advertising is incredibly busted online. The only way to really extract money from traffic is to write fake product placement articles, saturate with ads and site takeovers, manipulate people into incandescent rage, or some grab bag of the aforementioned. It's something I can talk about for an extended period of time, but I don't want to talk about it anymore. Monopolies gonna… monopol, I guess. Monopolize? Rates are so nasty that I think it's worth getting back to something more hand-made and colloquial. Back in the day, we used to sell it directly to people who wanted to put stuff in front of our readership, and now that Eric's been here for a few months it's time to get back to that. So! Now and then, I'm going to say, hey. Do you have something you want to tell people about? Do you want to talk to the exact kind of people who like that type of shit? Then send a mail to ebenson@penny-arcade.com and we can hook this up for you. I genuinely think the only answer is getting back to a more human state of affairs.