I'm out of town at the moment, my home utterly colonized by Genshin-addicted teens building their PAX West cosplay. I played it a million patches ago, so I don't even know who these hot boys they are trying to emulate even are. Tell me if this helps narrow it down: they have a novel hair color, an approachable androgyny, and radiate a safe sort of danger. 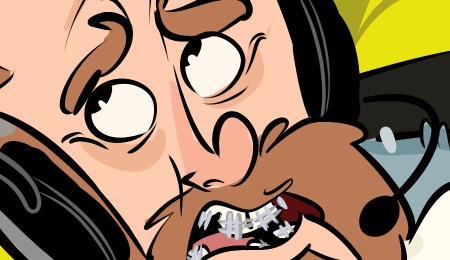 I think there's no other way to interpret the world we live in currently except to say that a very specific type of coot warned us about it well in advance: the safe money, I think, is that we're being observed, recorded, transcribed, stored, evaluated, corralled, and ultimately neutralized entities with an almost cosmic level of awareness. I once suggested that if I wanted to manufacture an utterly inescapable surveillance infrastructure, I would "found" Facebook. We even do all the tagging for them! You install a Ring doorbell because you don't want to leave the couch and the cops have full access to it; it's a de facto appendage of their apparatus. It's an ever-tightening mesh of tyrannical hybrid power, alloyed with our own sloth. So, to Gabe's question in the strip, no - I don't doubt it for a second. I just hope they're having a good time.

Oh! And precisely because I am out, Dirty Dwab is holding down the fort on stream - he asked for recommendations, and I gave him a ton, but once I got to Neon White we were done. It's about as Dabe as a game gets. I think he's gonna eat this thing alive, and this stream is already underway.