The current incarnation of the FTC is a little more prickly when it comes to rubber stamping this type of shit, so even if you were in the market for an Activision Blizzard King, you might not be able to have one. 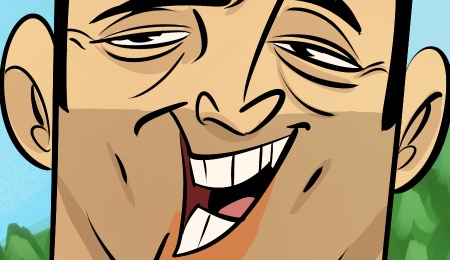 Because I have a pathological need to be fair, even within the parentheses of my satirical video game site, I should say that when Microsoft suggests that there are no "must have" titles which accrue to ABK, they don't mean that these companies do not produce legendary or even definitional videogames. That's essentially what the strip is about - obviously, that is not the case. Even in this subverted age, the era of Double Reverse Irony, it would be ridiculous to even suggest. The whole thing is like one of those weird dances some birds do, and they're doing it for the same reason: Microsoft is courting the state. But when they say that the companies they're trying to acquire have no Must Have stuff, it's not an aesthetic or business consideration as it applies to them. They are making the case that these companies' products are not Must Have for their competitors. Which is to say, their purchase of same will not utterly destroy other businesses. Some businesses have an opinion about that.

That is about the time Sony suggested that Call of Duty is their main third party source of revenue. That's where people play CoD, now - they grabbed this spot with the advent of the PS4, but more because the Xbox One was the Xbox One. Sony has suggested that Xbox owning Call of Duty could determine people's choice of console, which I completely believe. I used to think about it in terms of whether or not these games would be exclusive to the console, but that is the most simplistic level. They certainly could do something like that, but Game Pass is the actual platform. It doesn't have to be exclusive, it just has to be free to members with all DLC on mobile, console, or PC with unified saves. If you aren't thinking about ten years from now you aren't thinking at all.