In this particular case, it was leveled against Gabriel - but here, even here, he’s found some way to transmogrify it into some skulking attack. 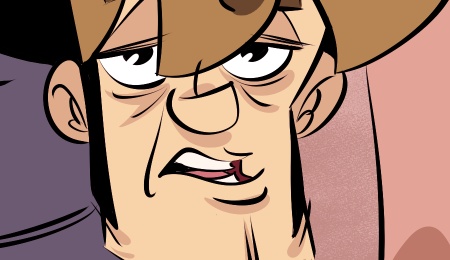 Penny Arcade predates the word Webcomic, we didn’t really need a term for it back then. In the manner of those who coax flame from shavings using only the most rustic accoutrements, we just called them “Online Comics” in our backward way.

Hey! So, cool shit is starting to happen again, which is nice. One of the cool things is that we’re working with Lightfox Games, the tiny local creator of the mobile PvPvE arena Knight’s Edge to sponsor our live Acquisitions Incorporated games at PAX! I have known a member of the team forever, and I’m glad we have a chance to do something together. The game is also ridiculously good. In the same way that Marvel Snap has somehow, inconceivably, boiled an entire game of Magic: The Gathering down into three meaningful minutes, somehow these sorcerers have taken something akin to Destiny’s Gambit mode, put it on a phone, and done the same thing.

The Collaboration is Jim Darkmagic themed, around the Staff weapon type to maximize the magical vibes.

- We’re theming the Weekly Tournament with AcqInc from August 29th to September 2nd, and anybody who plays in it gets their cute Green Flame emote. Exclamation point!

- The Acquisitions Incorporated SAVE BRENDA event goes from September 3rd through the 7th, and will allow you to rescue - and keep - Brenda, most favored among Jim’s doves. All you gotta do is brave a dungeon! Alone, though. Like completely alone. It’s probably fine.

They got hold of me last week to offer a quote for a press release, and I was like “I should probably play a bit more” and then I ran my whole battery down playing it. I don’t really play fast, competitive games on phones, and Knight’s Edge showed me that was a dumb policy.