Ronia was born at PAX West in 2009. Well, she decided to be born, at any rate. I catalogued the proceedings in a post back in the day, but to sum up: the bed was incredibly wet. 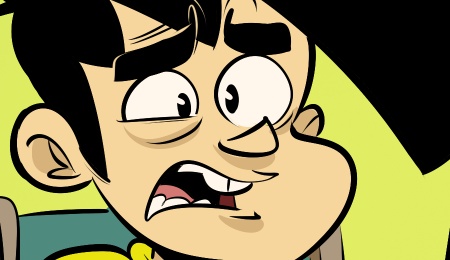 So typically PAX has been something that took her father away during her birthday for the last twelve years or so, but now PAX is something she can cosplay and hang out at with her friends. It's essentially a very sophisticated birthday party that her uncle Ryan Hartman has manifested for her and she has found it to her liking. Indeed, many have found it to their liking, if the last few days have been any indication. I see a lot of really cool bomber jackets and shirts my friends made being worn with pride; I was walking from the showfloor to get over to the Voodoo Ranger spot on the fourth floor, and the Mariachi Entertainment System were just… doing a show outside. I went the fuck out there.

It's been incredible to see the show waking back up, but I also knew from East where the trajectory was at. I gotta head back out to the "C" Team Better Reunion Panel, but it's been great to see everybody. Oh! My best friend Mike and I also made a comic strip for you to enjoy today, the latest salvo in an ongoing conflict about whose work is worth more of what. Now here, at the end, my primacy is established - and the Age of the Mike is come to a close. That's basically the vibe.

Oh! And the show store is still up if you're down to clown. Every young woman on my block is bedecked in the stuff; the team cracked some kind of code this year.

Attention #PAXWest mission personnel! PAX Space Program gear is still available at our merch booths, and online at https://t.co/LlhTrMyCPu through September 8th. Be sure to drop by and prepare for your journeys home! pic.twitter.com/eF2dit7h1Q