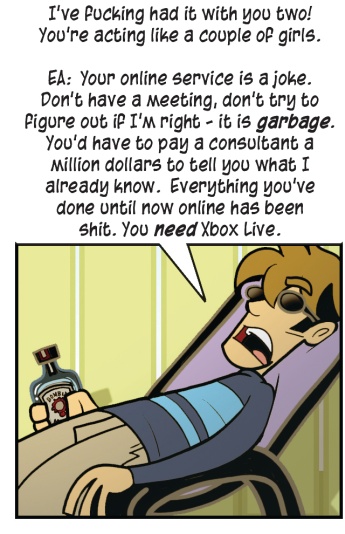 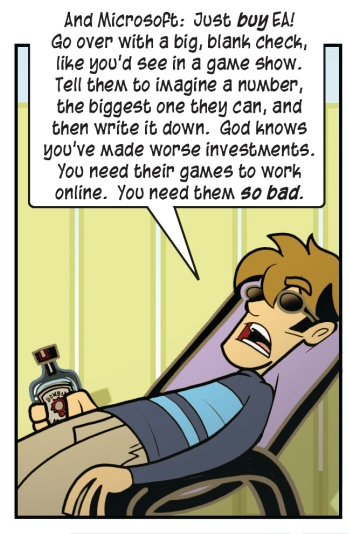 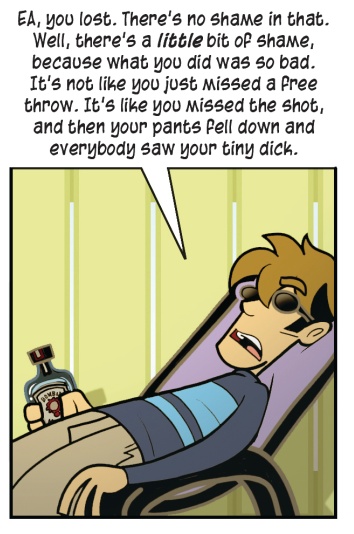 Playing the excellent SSX3 just made me angrier. This feud between EA and Microsoft has got to stop. It's hurting the kids.

When it was just regular sports games, I didn't really care. I wasn't running out there half-dressed to get a copy of Madden, got to get that Madden. The fact that their games only supported two players was silly in some cases, illustrated best by Tiger Woods 2004 (where they simply don't allow you to play the more interesting modes) and Nascar Thunder 2004 (race with as many as... one other driver). When they say Head To Head play, let's be clear - they mean only two heads. But when they started releasing what were essentially neutered forms of games, excising multiplayer co-op in Return of the King and Medal of Honor: Rising Sun, or leaving out multiplayer altogether in SSX3, I just flipped out. Every console has exclusives. I expect that. While multiplatform games provide at least the illusion of choice, antics like this completely pierce that notion. The Xbox and Gamecube versions are incomplete.

It was easy to think of EA's offering and Microsoft's offering as fungible initially. EA was doing theirs for free, and Microsoft had a pay service, and obviously free is... nice. But while I was being desiccated by Las Vegas nights soaked with alcohol, it seemed to me that their service is free because it sucks. It's free because it is so without ambition that it can be offered for nothing, until such time as they want to charge for it. Why else would they reserve the right, why else would they go through all the trouble?

I've spent enough time on Live with recent titles that it's impossible for me to compare the two approaches. You don't sign in to Live, you don't create a password, you push A. Every game supports voice and a universal friends list I can view from the web. I have a hard disk built in for content. There is an ethernet port. That's not so you can put a jelly bean in there in case you need it later, it's so you can put in a cable and access the Internet. You assholes.

That is all to say nothing about game invites. If I'm playing a game by Ubi Soft, I can still receive invites to play games from other developers - each publisher doesn't have it's own little fairy land where I can only play games with other people who have their games. I can be playing Crimson Skies and get an invite to play Ghost Recon. If I say yes, the tray pops out and I put in the other disc. Then, it joins me automatically. When I can do that with games from EA, I'll shut the fuck up. Until then, they need to act like big people and make choices that are of value to consumers.

When grabbing True Crime and Call of Duty yesterday, sweet Call Of Duty, they finally had a copy of Final Fantasy XI around - and based on a couple conversations I've had, I decided to take the plunge. I said some things that certainly seemed accurate from my position, and I certainly haven't flip-flopped and started thinking that World Passes are just awesome, but there are ways to mediate the inconveniences and still extract the fun.

Talking to a SquareEnix guy at Las Vegas, he let me know that just creating your character at about the same time can often get you set up on the same server. I haven't tried it yet, obviously the other way is to just keep creating characters over and over again until you get it right, like a reverse Russian Roulette. That doesn't sound like my idea of fun, so I'd try technique one first. Also, apparently the price for a World Pass was reduced for the US version, which helps - a friend of mine put in the time over the weekend and earned the 875 gil required on his server, primarily by selling crafting items directly to players in Auctions. This same friend also took me to task for highlighting the level differences between the person who earned the World Pass and the people they bring in, as the multiclassing system in Final Fantasy XI is almost perfectly suited to this problem. Got some friends coming to your world? Switch classes to something the party will need, and start leveling up in another discipline. You'll keep your skills and hit points, but you'll have some early level work to do mastering your new abilities. I mainly wanted to establish all this because I feared I'd scared people away that might have otherwise enjoyed it. These techniques aren't perfect, but some combination thereof will certainly suffice.

Now, I need to go meet Pork in the line for the movie. We saw Matrix Reloaded at the Imax a few months ago, and apparently it did so well that they decided to open Matrix Revolutions the same day as they do in your mortal theaters. Around here, the cost to see a movie on a regular screen and the cost to see it on a screen the size of God is pretty much the same, so it's hard to understand why you wouldn't. It's showing at Six In The Morning, and Pork mentioned that people had started to line up last night at seven so he's been there all Goddamn night in a bone chilling pantomime of the PS2 launch. I'm going to bring him something hot to drink, and then commence suffering myself. God Damn the person who started that line, God Damn them a thousand times.