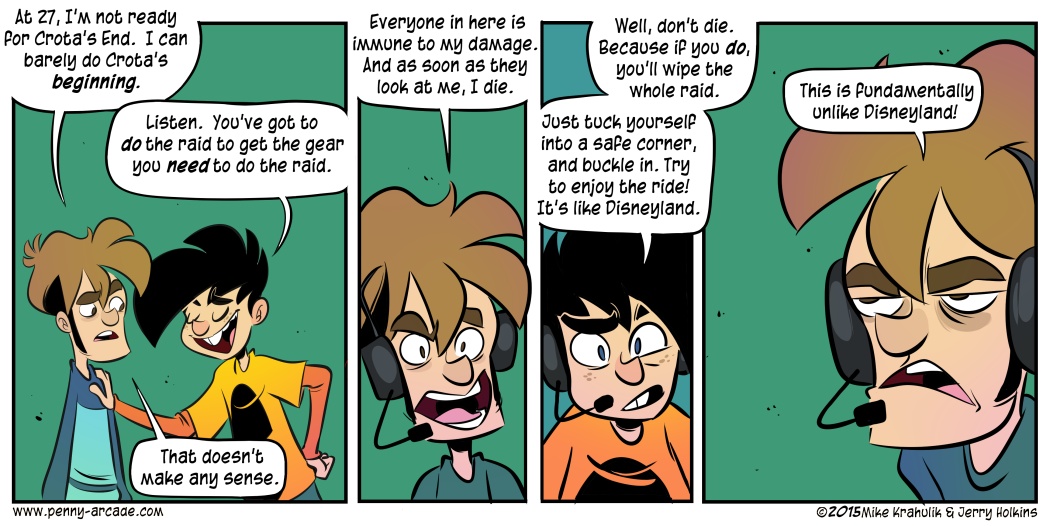 At some point it became clear that if I ever wanted to play a videogame with Gabriil again, I'd have to take up Destiny. So I did, purely as a medium of communication. I thought of it as being something like going to a bar I didn't especially like because it was my friend's favorite bar. And maybe I don't have a high opinion of my friend's opinion on this bar. He doesn't even drink, he eats here. On purpose. He only likes this bar because he can sub tots for fries at no additional charge.

I could tell you about my raid experience in detail, it was not recorded in the "positive" column, but the strip is loaded with every fact you might need. Except that I spent about forty five minutes huddled thus. Hell yeah! That's how a tactical motherfucker like me invests his rare and precious leisure hours.

I wanted Destiny to be something else, back when it came out, and it's not that. I think it's entirely possible I was wrong about it, but this is a fairly complex idea in practice. It would be like being a fan of, say, Tegan and Sara, and then they made a techno album for some reason. Maybe it was even a good techno album, but it's not what you wanted. Who is "right" in this case? Everybody? Or is it even about "right"? Under optimal circumstances, we are not obligated to one another: we rejoice where we find common ground and we accept that we won't always do that. For example, I'm going to spend the rest of this post talking about Jem. How does that make you feel?

I like Jem for some reason. Specifically, Jem and the Holograms. I also like gems; I gots the dragon sickness. We can cover that later.

It's weird. Yelling About Things That Just Happened On The Internet is an industry. Maybe I'm a part of that. But it's not really clear to me what is going on in the new trailer, or how it's connected in any way to Jem and the Holograms, or why it inverts the show's premise in such a way as to render its themes inert. Did they have some script floating around, and married a known IP, but then realized that Jem and the Holograms is basically a high tech Hannah Montana? There are a hundred really cool, potentially even outrageous takes on Jem that… gah. "Cyber Keytar Nancy Drew" took, like, three seconds. These fuckin' villains, man.

There is a very specific thing happening here that keeps happening, and maybe if I draw a circle around it in salt and make the proper incantations something different might happen next time. Maybe it won't change until you get there and stake your job on it. You will definitely lose your job! Have fun eating your scruples.

An individual episode of Jem might be kind of dumb. I can almost guarantee that part actually. Individual expressions of a "high concept" can be silly while the shimmering, primal sigils that make it up are retained. The actual story here is about Identity, Competition, and Legacy. What I like now, as an adult, is the sigils. It's like the show has been banging around in a rock tumblr for thirty years in my head, and is now something arguably distinct from a handful of normal, stupid rocks.