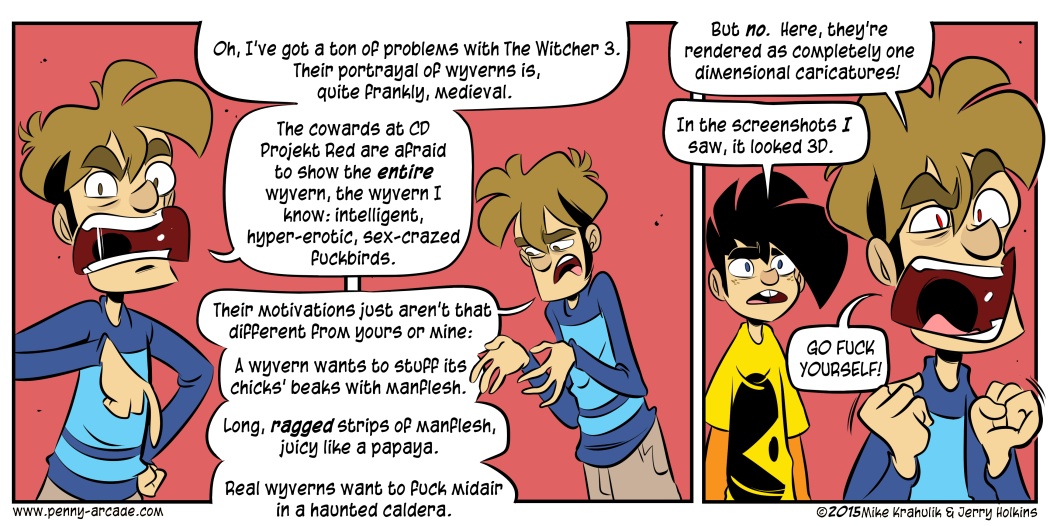 As a generality I try not to engage in "do you know who I am" antics when it comes to trying to get free shit, I think I've talked about that before. Of course, sometimes "who I am" is the precise reason I can't have something. If you ask me, I've been perfectly reasonable throughout my eighteen year stint - deploying precision rhetorical munitions only when absolutely necessary. It's entirely possible that I called Epic's Mark Rein a "Liar-King" who "scuttled out of a rotting log," but sometimes its vital in a dialogue to suggest that your opponent is some kind of grub. It's... you know. Aristotelian, or whatever.

You'd best believe I did everything I could to secure this Witcher shit in advance of the 19th, but it didn't matter, because the PC version isn't available even to reviewers yet. Everything you've read about it from reviews is most likely from the PS4 version, and I didn't put a new board in my computer so I could play a console version of the game in the same way that a person doesn't go to eight years of medical school in order to be called Mister.

So I'm pretty fucking cranked up right now. I'm fucking around in the strip, obviously - my mission is, as always, to create wholly new sentences, and I feel confident that "Real wyverns want to fuck midair in a haunted caldera" has never been seen before, nor will it be seen since. It's simply not that useful a phrase; it doesn't have broad application. That's not a burrito option at Qdoba, for example.

But, yeah - they're basically the masters of lore. I don't always read journal entries in games, but when I do, they are from The Witcher. Historically, the entries can change and shift based on what's happened, and I was rewarded in a profound way for my enthusiasm in the first game - knowing about a creature, its lore and history, turned a "boss fight" into a satisfying story moment in a way I'd never quite seen before. Everything in these games exists in a kind of mystic ecosystem, which they labor to keep it true to itself.

I was happy to see that it had presold as well as it did, but Geralt is an acquired taste; I hope people like him once they get in there. The Last Wish is an almost perfect summer book, if you want to get a foot in the door; you might even finish it before the game comes out if you start today. It's sorta like if the Brother's Grimm had written A Song Of Ice And Fire. Which, I mean, for me, that's like… yes, please.