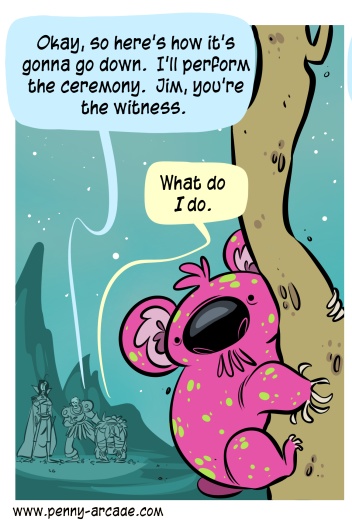 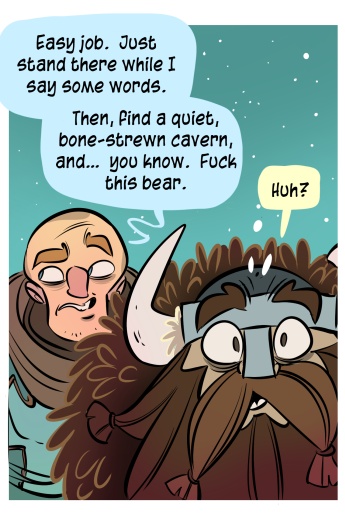 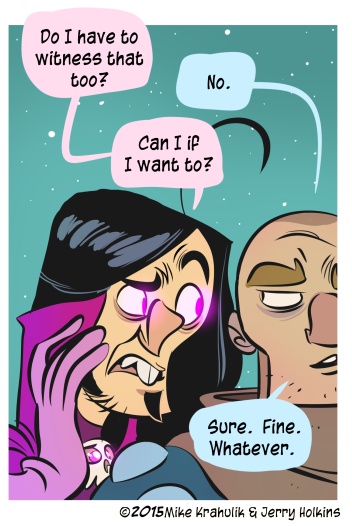 In the same way that Bruce Banner's secret is that he's always angry, Mike Krahulik's secret is that he is incredibly intelligent. This is something he doesn't like people to know, but he couldn't do what he does if he weren't. My family has a home because I befriended him in high school; it's as simple as that. I found myself in his nimbus and then, barring a few poor choices on my part, everything worked out.

So doing a PAX without him was definitely strange. Not bad, at all. But strange. You have to understand, you can just be by him and succeed. If he's not there, I have to attempt it myself. I can't execute it at his level, but I can fashion myself into a marginal improvement over a bare stage, which I believe I succeeded in doing. Khoo was an excellent addition to the Q&A, I can see that happening again, actually - even in the absence of crisis. And I have to take a second to appreciate my friend Kris Straub, who came through in the most unbelievable way. He and I handled the final round of the Omegathon (Tetris and Dr. Mario!), the first ever Child's Play Live Auction in Australia ($15,850!), and the Make A Strip panel which went better than it had any right to. At every turn, he rose to the challenge. We even invented a new genre of pornography at the request of a question card - "vesperotica" - a carnal cave of unfettered bat-love.

Thanks to Jackbox Games (who I have taken many opportunities to praise on the site) we were given a wholly custom version of of Quiplash and Fibbage 2 studded with questions about PAX, Australia, and the players we had on stage. This created a kind of latter-day interactive game show which attendees (and those around the world) could play on their phones. We'd never tried anything like this before, but I had an amazing time, and a big part of that was who I was playing alongside. Kris came through for me again here, but so did MC Frontalot. Also completely amazing were The Doubleclicks, who I had met at shows, but never actually had a chance to hang out with before. A++, would hang again.

I couldn't count the number of people who came up to me this weekend to wish Mike well. I'm just not used to that, and I can guarantee he isn't. But I will make absolutely sure that he absorbs it. Imagine that I am a koala and your love is the chlamydia. I will claw him, and pee your love into the hole(?!?).

As for the show, it was a PAX, which is really all that need be said. As a connoisseur, I can say that PAX Prime and PAX East have their own deals, defined in part by their longevity but also by the vessels which contain them. Having a single, massive lozenge to hold East in is a huge part of how that show feels, and Prime's ancient culture coupled with its perpetual wilderness trekking grants the proceedings a kind of Old Testament drama. PAX South and PAX Aus feel like each other in that they have the same vital energy that comes from a recent founding, which is a combination of the template for PAX we discovered on accident a decade ago and the people who attend it, who already seem to know how to PAX, in the vast, untracked expanse before thought.